MARKET SUMMARY: As measured by the benchmark S&P 500 index, stocks dropped 16.1% in the second quarter. This drew their loss for the year to 20.0%, marking the worst start for stocks since 1970 and leaving equities in bear market territory. The cause for the unrest was an escalation of the same concerns from the first quarter – fears of a Fed-induced recession and inflation magnified by supply disruptions and the war in Ukraine.

For diversified stock investors there was no real place to hide; seven of the S&P 500’s eleven sectors were down over 15% in the first half. Energy was the only sector in positive territory, with a YTD return of 31.6%. Since it only comprises 4.4% of the S&P 500, though, it did not offer enough upside leverage to really move the needle – even with our strategic overweight of the sector. The defensive Healthcare group, another of our overweight targets, offered some protection for equity portfolios, posting a loss of less than half that of the Index. Detriments to performance were lags in Technology and Communications, both of which were affected by the relative outperformance of mega-caps Apple and Microsoft in Tech (the two names comprise 47% of the market cap of the entire sector) and Alphabet in Communications (45% cap share of the sector). In the end, our stock selections performed roughly in line with the benchmark index. 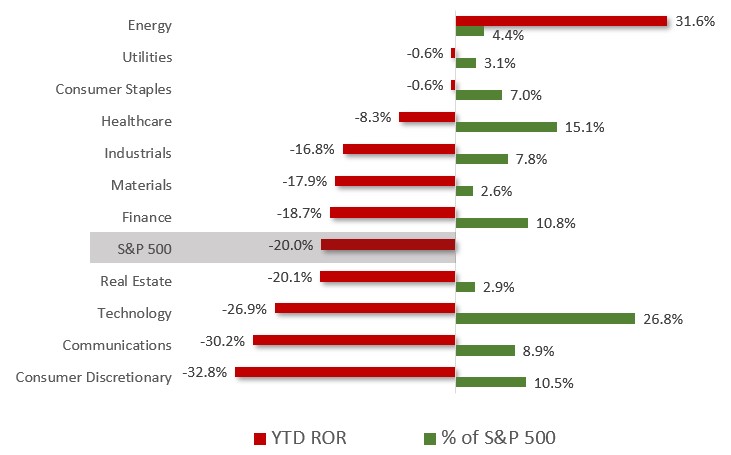 Speculators were trounced in the first half. Cryptocurrencies declined across the board, with Bitcoin dropping 60%. This brings the decline from its high to 69%. On the stock side, we covered the debacle with ARKK Innovation in an April research report (link), and it has declined over 20% since then. It is now down 75% from its high, wiping out all of its gains over the past five years. High profile “meme” stocks GameStop and AMC Entertainment are down 63% and 78%, respectively. Apparently this time is not quite as different as the WallStreetBets crowd had once proclaimed. 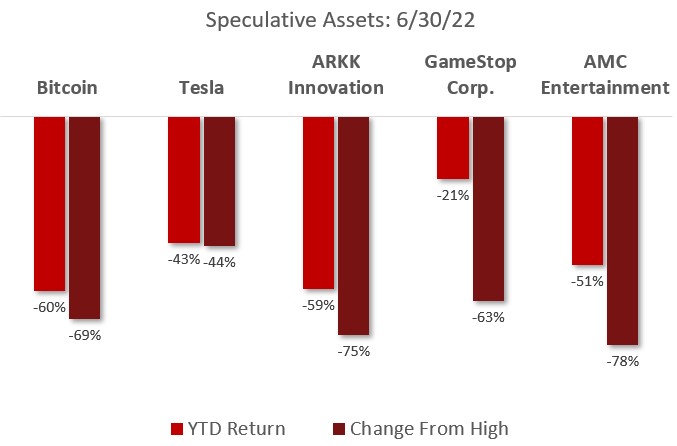 As a direct result of skyrocketing inflation and Federal Reserve rate hikes, the first half was the worst-ever start for investment-grade bonds. Yields on the 10-year Treasury more than doubled, crossing the 3% mark for the first time since 2018. Bonds, as measured by the Barclays Government/Credit Index, declined 5.0% in the second quarter, bringing their loss for the year to 11.1%. Yield-hungry investors at the long end of the maturity spectrum fared much worse, with the Barclay’s Long Government/Credit index losing 21.9% in the first half of the year. Our defensive strategy for portfolio maturities was very effective in mitigating the losses in our bond portfolios.

ECONOMIC FORECAST: Recession fears have been increasingly prominent in the news cycle over the past few weeks. It is not difficult to make a case for a slowdown given the cost of food and fuel that consumers are so viscerally experiencing. Our macro research resources collectively show a higher probability of an outright recession or slowing economic activity. The Atlanta Fed’s GDP Now initially forecasted a 1.9% growth rate for the second quarter but the latest release calls for a negative 2.1% print. With first-quarter GDP falling by 1.6%, a second-quarter contraction could make for an official recession call. Although we concur that the odds have increased for a pullback, the most recent ISM and employment reports question the slowing narrative. History points to Federal Reserve policy errors as being a primary culprit in throwing the economy into recession. We are hopeful the economy can avoid that fate with a more patient response from monetary officials.

Investors prefer an expanding economy, but a short pause may be the best outcome to mitigate inflation and Fed overreaction. May’s CPI report, driven overwhelmingly by oil prices, showed the highest level of price increase since the early 1980’s. The Federal Reserve is intent on gaining control of inflation and is willing to cause a recession if necessary to tame it. We are pleased to see a few recent positive developments on the inflation front. First, the Biden administration softened its stance on fossil fuels. Officials are set to meet with Saudi Arabia next month about expanding output. Additionally, White House officials are working with US refiners to help boost domestic capacity. Oil prices have fallen by 20% since last month and could fall much further over the coming months. Secondly, the most recent ISM reports showed a decrease in the prices paid portion of the index. It also showed decreased delivery times which points to improved supply chain delivery times. Lastly, the most recent personal income report showed wage growth below the inflation rate. The Fed wants to avoid a wage/price spiral at all costs and this risk seems to be off the table at least for now. For these reasons and more we feel the worst is over on the inflation front and should set the stage for a second-half recovery in growth.

FIXED INCOME STRATEGY: As mentioned, the second quarter brought a continuation of pain for bond investors as inflation fears and a Fed tightening regime drove yields up across the curve. Corporate bonds took a particularly hard hit as recession fears caused yields on those issues to increase as investors demanded more return for perceived increased risk. Driving the point home, the Fed increased the Fed Funds target rate by 0.75% on June 15th, which was the largest increase in nearly 30 years. Oddly enough, the action had the impact of driving down bond yields. This can be seen with the 10-year Treasury, which peaked at 3.5% yield the day before the Fed announcement and ending the quarter yielding 3.0%. The investor sentiment in play seems to be that Chairman Powell is channeling Paul Volker, who famously brought inflation to its knees with a recession-inducing rate hike regime in the early 1980’s. Our takeaway from the action is that while inflation is not a transitory phenomenon, fears of runaway prices are overblown.

CCM’s strategy throughout this low-rate environment has been to maintain relatively low average maturity structures within bond portfolios to reduce the risk of principle loss due to interest rate increases. This strategy has been particularly valuable in 2022 as CCM bond portfolios have experienced market value losses that are half that of the benchmark Barclays Global Government Credit index.  While inflation remains a concern, we think that Fed action will be effective, and ultimately provide support for bond investors.  As a result, we are starting to nibble at the edges with five- to seven-year maturity purchases in select corporate bonds and Treasuries.

EQUITY STRATEGY: The second quarter saw violent swings in market direction as investors navigated the foggy economic waters. The most negative market returns came on the heels of positive economic news as the risk of a Federal Reserve policy mistake became a heightened possibility. The consensus view seems that the Fed will overreact to inflation and throw the economy into recession. This view is most evidenced by the S&P 500’s sector performance, with the most defensive sectors outperforming the most economically sensitive sectors by nearly 17%. Our outlook remains that the economy is slowing, but any recession will prove shallow and have a limited impact on equity returns from current levels. Inflation and the Fed’s reaction to it will be the driving concern until more clarity comes.

There are several reasons for our constructive view on equity markets. First, valuations are below their 30-year average on both a trailing and forward basis. P/E ratios look even better if the high-flying FANG stocks are removed from the index. While not cheap, stocks should perform well assuming inflation turns as expected over the coming quarters. Secondly, margins and earnings growth are holding up through the market upheaval. Margins remain close to record highs as companies have been able to pass along price increases to the end consumer. These will likely come under some pressure but from an elevated base. Analysts expect earnings to grow at 13% in the current year and 8.5% in 2023, a very healthy yet reasonable growth rate. Like margins, earnings growth could be under pressure but will likely remain positive. Lastly, while absent in the official numbers, capital investments made over the pandemic period will boost productivity over the long term. These investments will add resilience to company income statements over the next decade. We fully anticipate higher equity returns over the remainder of the year.

ASSET ALLOCATION: The allure of a traditional 60% stock/40% bond portfolio the ebb and flow between the asset classes that tempers the volatility of individual asset class returns. In 2022 that relationship has broken down, as the stock and bond markets have declined in lockstep. Due to the sheer magnitude of the losses, the result is the worst recorded start for 60/40 balanced portfolios in history. After the 10-Year Treasury yield eclipsed 3%, though, the bond market began to trade on recession fears and the usual inverse correlation between stocks and bonds during times of crisis began to reassert itself. We are hopeful that the pattern continues, which should mean the worst is behind us.

Looking ahead, the path for the markets will be dictated by the economy – both in terms of growth and inflation. With the odds for recession now around 50/50, the economic outlook is hazy. It is in times of uncertainty that we rely on our proven asset allocation system for guidance, and it still indicates that a modest overweight position in high-quality equities is warranted. Also of use during these periods is historical precedent, and the pattern is reassuring. In the past when the S&P 500 has declined in excess of 15% to start the year, investors have then been lured from the sidelines by rock-bottom prices. Fifteen percent-plus first-half declines have occurred in 1932, 1939, 1940, 1962 and 1970, and the average return for the second half has been 24%. That is quite a large number and is not our base case assumption, but we do at least expect calmer markets during the second half of 2022.