Don’t Believe The Hype: The Sad Story of ARKK Innovation

Don’t Believe The Hype: The Sad Story of ARKK Innovation

In 2020 the ARKK Innovation Fund was one of the top performing funds in the U.S., posting a total return in excess of 150%. While fund manager Cathie Wood is an expert on the small, disruptive, (and largely unprofitable) firms in which she focuses, we have long been suspicious of the fund’s strategy – particularly after having survived the great Tech Wreck in 2000, which saw the tech-heavy NASDAQ index decline over 75% after failing to live up to their hype.

Speaking of hype, after reaching certified investing star status after her tremendous year in 2020, Ms. Wood was ubiquitous in the investment news cycle as a talking head extolling the virtues of key ARKK holdings such as Teladoc Health.  In December 2021 she posted a market commentary piece to her website that was stunning to professionals such as us whose ethics are unwavering – “(ARKK Innovation Fund) could deliver a 40% compound annual rate of return during the next five years.”  Granted, it was a conditional statement, but without question it could easily be misconstrued by many retail investors in search of quick outsized returns.

Also on the topic of hype is the very nature of the typical ARRK Innovation Fund holding.  Below are the top ten positions as of 4/28/22: 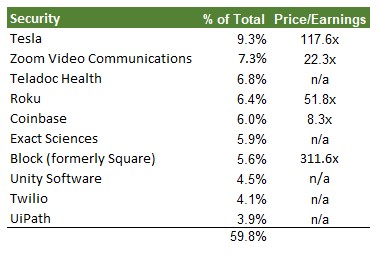 Of note, half of the positions lack a Price/Earnings ratio since there are no earnings to speak of.  Two sport P/E ratios in excess of 100x (and for an auto manufacturer we believe Tesla’s valuation to be ridiculous).  The remaining three at least trade within the bounds of reason (although for Coinbase anything is suspect, as they operate in one of the most overhyped sectors in the world – cryptocurrency).  What is undeniably unreasonable is concentrating nearly 60% of the portfolio in a mere ten issues, defying almost all of the standards for proper portfolio diversification and risk management.

As we predicted early on, things would not end well for ARKK Innovation.  Although Cathie Wood continued to dominate coverage in the investment press well into 2021, cracks in the strategy began to emerge.  Despite the fact that 2021 was a banner year for tech stocks, with the S&P 500 Technology sector gaining 34.5%, the rising tide definitely did not raise all of the boats; by the end of the year the ARKK Innovation Fund had posted a loss of 24%.  This was a staggering performance lag of 68.5% for the year.

The pronounced decline in ARKK Innovation continued to pick up pace in 2022, and on April 26 the decline had become so severe that the entire 150% return from 2020 had been erased. 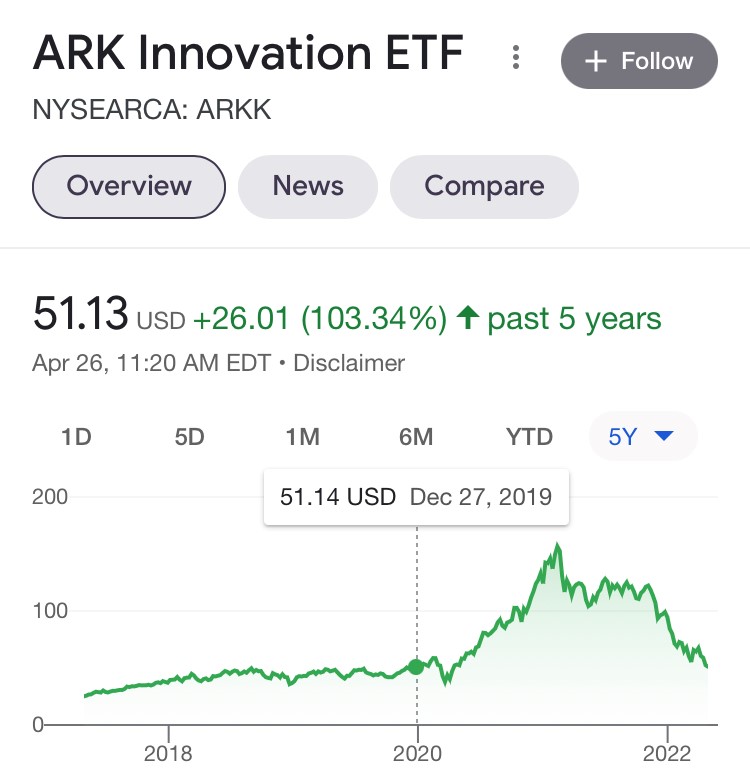 To add insult to the grievous injury, on April 28 Teladoc Health, which comprised 6.8% of the entire fund, announced earnings.  Actually, instead of earnings they announced a record loss of $6.7 billion and slashed their forecast for future earnings.  The stock declined over 40% and resulted in yet another decline for ARKK Innovation.  In the end, what was one of retail investors’ darlings is now a major laggard:

Bottom line: An investing star emerges every year on Wall Street. Typically these investment managers employ hyper-focused trading strategies, and through random chance a select few will generate a greatly outsized investment return. However, it is extremely rare that this can be repeated on a consistent basis.  When coupled with promises of further riches to follow instead of adherence to the industry standard footnote of “past performance is not indicative of future results, investors should take heed.  Consistency ultimately wins the race.