MARKET SUMMARY: The stock market was buffeted on three fronts during the first quarter – inflation, Federal Reserve rate hikes and Russia’s unprovoked invasion of Ukraine. The S&P 500 index bottomed on March 14 at 4173.11, a decline of 13% for the year which placed the index firmly in “correction” territory. From there, investors returned to old habits and fled to the so-called safety of the largest technology stocks. Stocks closed the quarter with an 8% rebound, narrowing the S&P 500’s decline for the first quarter to 4.6%. Due to the concentrated nature of performance, it was a difficult quarter for most stock pickers, with active mutual funds declining 5.9% during the quarter. For CCM, our biggest challenge was the sluggish performance of stocks in the “quality” space where we focus, and we lagged the index as well. 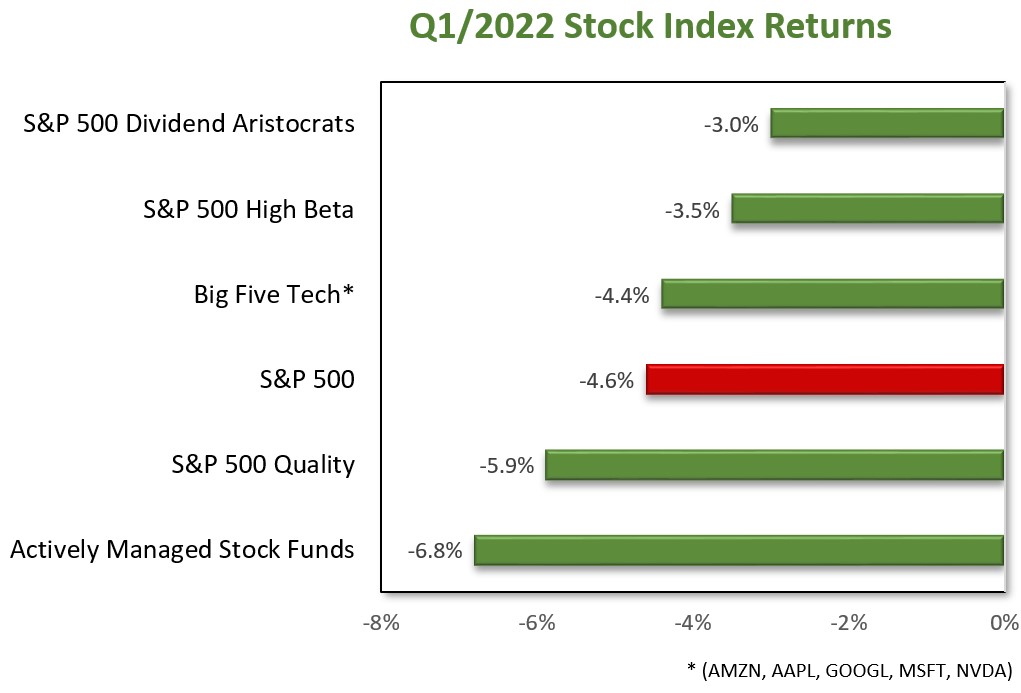 The first quarter of 2022 was the worst period for the bond market since 1980, when Paul Volcker was famously combating double-digit inflation. As measured by the Barclays Government/Credit index, bonds declined 6.3%. The steep decline was the result of persistently high inflation and the Federal Reserve’s reactionary pivot from a very accommodative policy stance to increasingly restrictive. The outlook for Fed rate hikes morphed from three to five times in 2022 to seven after the March FOMC meeting minutes were released. CCM’s defensive positioning within bond portfolios performed as expected, and our losses were roughly 60% of that of the index.

ECONOMIC FORECAST: Economic growth was robust in the first quarter, evidenced most clearly by job market conditions. Employers added over 1.6 million jobs and applications for jobless benefits stand at their lowest per-capita rate ever. Wages are growing at a pace not seen in decades, with inflation-adjusted wages up 2.6% over the pre-pandemic levels. The latest Confidence Board survey shows the jobs hard to get metric at the lowest since 2000. As good as the job market is, there are still a record number of job openings in the market waiting to be filled. The latest estimates are for the unemployment rate to fall to 2.5% by next year. Historically, a strong jobs market is accompanied by a buoyant consumer, but inflation is having a profound effect on consumers’ outlook.

Inflation has been our top risk over for over a year and the situation has deteriorated further in 2022. China’s zero-COVID health policy along with the war in Ukraine has dashed hopes for a rapid supply chain recovery. Fuel prices, which feed through to every facet of the economy, saw their highest levels since 2008. Consumer behavior is especially sensitive to prices at the pump, which has led to a sour outlook in the most recent consumer confidence surveys. The economic growth expectations are at a critical juncture with the Fed having the deciding hand. If actions prove too dovish, inflation may continue to spiral higher, which could upend decades of low and stable inflation psychology. Too hawkish and they risk stifling investment and economic growth. If history is any guide, the Fed will not be able to engineer a soft landing. The economy has more room to grow but we will be watching Fed actions over the coming meetings for signs of cracks.

FIXED INCOME STRATEGY: The specter of inflation drove a dramatic flattening of the yield curve in Q1. The sources were multiple, ranging from supply chain and labor shortages, possible overly stimulative fiscal and monetary policy, and the outbreak of war in Ukraine. The war was the only “new” news, but it had a striking impact on the price of oil, which, when added to the other factors, brought CPI inflation to 7.9% year over year.

In light of the new inflation data, the major surprise is that bond yields are not higher than they are, as real 10-year rates (10-year yield minus inflation) are in the range of negative 5.5%. After beginning the quarter at 1.51%, the 10-year US Treasury climbed to 2.34% as of March 31. The front end of the curve bore the brunt of the pain, as the 2-year yield rocketed to 2.34% – precisely even with longer-term rates.  The flat yield curve in maturities greater than two years indicates that investors are fully discounting all Fed rate hikes currently. That could change with continued bad news on the inflation front, so we remain cautious and are avoiding extended maturities with new purchases.

EQUITY STRATEGY: Equity markets proved incredibly resilient during the most challenging operating environment seen by companies in decades. Supply chain woes, the highest inflation seen since the 80s, and a war on the European continent could not dampen the outlook for American companies. Analysts remain upbeat in their latest quarterly earnings estimates with 15% growth expected from solid revenue growth. Profit margins are projected to remain at record levels despite continued input price pressures. The TINA (“There Is No Alternative”) trade seems apropos with China, Europe, and every emerging market economy likely to fare worse than the U.S. over the coming years.

CCM’s strategy should perform well in a U.S.-centric environment led by companies with strong operational acuity. The performance of quality shares suffered relative to the market in the first quarter, but this is likely to shift as we progress further into the current cycle. Our current sector positioning looks to take advantage of higher energy prices and interest rates. Additionally, we have overweighted companies whose sales are mainly U.S.-based. The biggest risk to our outlook is Federal Reserve policy, and we will move to a more defensive positioning should rate hikes become too restrictive for economic growth to continue.

ASSET ALLOCATION: As we shared in our writing on March 8, we effected a modest reduction in equity exposure in balanced portfolios. The strategic tilt was the result of rising interest rates and the high degree of geopolitical risk and was in the interest of tempering portfolio risk. Since that time the expected return spread between stocks and bonds has contracted further, and now resides within plus-two standard deviations from the mean.

Our lightened preference for equity exposure does not indicate bearishness, however. The U.S. economy remains very strong, and we are only in the early stages of Federal Reserve rate hikes. According to Deutsche Bank, stocks have gained 7.7% in the first year of the 13 hiking cycles since 1955. It is when rate hikes finally tip the economy towards recession that stocks typically begin to stumble. Barring an escalation in geopolitical tensions and another surge in oil prices, we do not expect a recession until 2023 and prefer to remain invested in high-quality equities rather than commit additional capital to the limited opportunities expected in the bond market.