Credit Spreads and Implications to Investors

Credit Spreads and Implications to Investors

Periodically financial commentators will refer to credit spreads, but what are spreads and what insights do they offer investors?  To unpack the term, we will back up to some basic principles of bonds

Bonds, recall, are simply loans to companies, governmental entities and other borrowers by investors who desire a return that is less risky and has more predictable cash flows than might be offered by stocks for example.  Clearly however, all borrowers do not represent the same risk profile.  A highly leveraged company that is losing money can’t borrow money at the same cost that a well-run, profitable one can.  Lenders require additional compensation for taking on more risk.  That risk is captured in the bond yield.

Because bond yields are constantly shifting, investors have developed a convention of measuring the yield of a “credit” bond (that is one other than a Treasury) relative to US Treasury bonds of similar maturity so as to capture the amount of credit risk inherent in the credit bond.  Treasury notes and bonds are used as the baseline for comparison because they are considered risk free investments within conventional financial theory.  One might debate whether Treasuries are truly risk free, but that is the subject for another blog post…

For example, a Goldman Sachs 5.25% due 7/27/21 available for a price of 105.585 to yield 2.094% could be measured against a US Treasury note maturing 9/30/21 yielding 1.482%.  The spread in this case is 2.094% – 1.482% or 0.612%.  Normally spreads are expressed in the form of basis points or hundredths of a percent.  In this example then, a trader would quote the Goldman bond at a level of “61.2 basis points versus the comparable Treasury.”  Because the investor is taking on additional risk of lending to a company that potentially might be unable to repay the loan, they are compensated for taking on that risk, in the form of a 61.2 basis point credit spread.

The principle of additional risk being rewarded with additional spread can be seen in these stats from the Barclays Global Credit indices at mid-day on October 2: 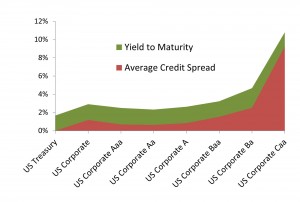 The pattern is very clear – corporate bonds that are considered riskier are rewarded with higher yields so as to induce investors to purchase those bonds.  One interesting little tidbit – the average spread of the Aa index is less than that of the Aaa index.  This is telling us that the market is viewing the bonds within the Aa index as better risks than the rating agency!

Spreads expand or contract constantly, depending on the market’s assessment of risk both for individual companies and at a broader macro level.  For example, if Goldman Sachs reported terrible quarterly earnings, one would expect the spread on the bond mentioned above to increase because of the perceived additional credit risk.  Similarly, at a macro level, one would expect spreads to widen for all issuers on the report of bad economic news which might be the precursor of a recession and impending business strains.

Mr. Key began his career at the South Carolina National Bank as a Corporate Banker and later moved to First Union Bank where he created and managed the Private Banking Group in Columbia, South Carolina. He subsequently served as Treasurer of The Seibels Bruce Group, a property and casualty insurance company. Mr. Key joined CCM Investment Advisers in 1998 and his responsibilities include strategic organization oversight of the firm, management of client portfolios, marketing and fundamental research in the finance and REIT sectors. In addition, he serves as the Fixed Income Strategist for the firm. Mr. Key was graduated from Furman University and received his MBA from the University of South Carolina in 1982. He is a CFA Charterholder, a former Certified Cash Manager, has served as an adjunct professor of finance at the University of South Carolina and has provided expert consultation on legal matters involving lending and securities. Mr. Key is a past President of the CFA Society of South Carolina.