Inflation – A Risk or Distraction Today?

Home/Commentary/Inflation – A Risk or Distraction Today?

Inflation – A Risk or Distraction Today?

To those of us who came of business age in the 70’s or 80’s which saw periods of rapid US inflation, the events that are unfolding today have an unnerving aspect to them.  We recall how difficult it was to tame inflation and the price exacted by the Federal Reserve, led by Paul Volker, to put the genie back in the bottle.  Are we setting ourselves up for another cold winter facing an inflation pandemic? 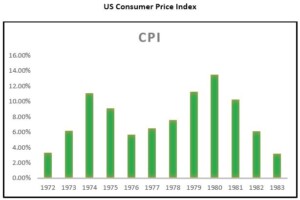 In considering the question, it is useful to start with what has been identified as the root causes of inflation, at least by economic theory.  Textbooks have been written about the topic so this is not intended as a deep dive, but merely a highlight of a few points.

Classical economists posit that inflation is the result of an economy that is overheating.  Demand grows more rapidly that supply, causing an imbalance.  Recall from basic economics (or common sense) that at a micro level, when the demand for a good or service increases with a given level of supply, the normal result is an increase in price.  The same should be true in the broader economy; if economic activity is such that consumers of goods and services seeking greater quantities of goods and services, one would expect a general price increase.

There are other related causes that could be rolled up under this larger category.  For example, Wage-Push inflation is a phenomenon when the labor force exercises a hegemony over employers to force wage increases.  Typically this is seen when there is a shortage of labor or in the case of labor organizing, unions demanding higher wages.  Because labor is a factor of production, these costs increases are passed through to end product pricing, thus inflation.  But the basic principle is the same – an imbalance of supply and demand which results in a price increase.  So called “exogenous shocks” (one of those terms from an economics course that I’ve been dying to use at some point) also can create supply and demand imbalances that cause inflation.  The Arab oil embargo is a perfect example which led to a period of higher inflation in the mid 70’s.

More recently, the Nobel Prize economist Milton Friedman, who was a Monetarist (as opposed to a classical economist) famously opined that “inflation is always and everywhere a monetary phenomenon in the sense that it is and can be produced only by a more rapid increase in the quantity of money than in output.”  Interestingly, this is an application of the supply and demand concept, but instead of in the context of goods and services or labor, it applies to the money supply.  Essentially Friedman is saying that if the supply of money grows beyond the demand for such, the result will be a depreciation in the value of the currency.  Because the currency is devalued, the price of goods and services is greater – in other words, inflation.

The only problem with Friedman’s theory is that events have not played out as would be expected over the last several years.  The Fed adopted an extreme expansionary policy during the Great Financial Crisis (GFC) in order to avoid the mistakes that led to the Great Depression.  After several years of loose money, the Fed began a very modest contraction, but one which could hardly be classified as tight money.  Federal budget deficits shrank several years after the passing of the GFC, but the Tax Cuts and Jobs Act of 2017 (TCJA) led to greater deficits, which were accommodated by the Fed.  The sum of the tremendous fiscal and monetary stimulus, under Friedman’s framework should have led to some degree of inflation, but it hasn’t.  In fact, the focus of policy makers over the last twelve years has been igniting some degree of inflation rather than keeping the genie in the bottle.

The lack of inflation has led to the development of so called Modern Monetary Theory (MMT) which essentially proposes that a government can print as much of its money as it wants because its debts are owed to its citizens, which will not force the country into bankruptcy.  To traditionally trained economists (and investment managers like those of us at CCM), this seems like a magical fantasy.  But the fact of the matter is, the printing presses have been running and there has not been any inflation.

So what’s the missing ingredient?  One potential answer is the psychological component of inflation.  Inflation only occurs if economic players believe that the cost of goods or services are going up, which can stimulate excess demand as they seek to make their purchases before the prices goes up.  The fact of the matter is that such a mindset doesn’t exist today outside of a few specific instances (like toilet paper).  That’s a huge change from what many of us can recall back in the 70’s and 80’s when consumers needed to buy things now before the price went up.  In fact, the expectation in many cases today is that prices will go down – like in technology.  Anyone bought a TV recently?

If indeed psychology is the answer, MMT will work, at least until it doesn’t work.  At that point, policy makers will be scrambling to put the genie back in the bottle as they were in the late 70’s and early 80’s.

Our approach as investment managers is one of caution, but a desire to participate.  We believe that the fundamental pieces are in place for a modest degree of inflation over the next several years.   This will likely have a positive effect on the stock market as economic activity heats up and sales grow.  However, we do anticipate bond yields to drift up somewhat, driving bond prices down modestly (recall that bond prices vary inversely with yields).  Our strategy is to over-weight stocks in our balanced accounts while maintaining a relatively short average maturity and duration for bond portfolios.  By limiting the average maturity and duration we reduce the downside risk cause by a run up in yields while preserving the shock absorber effect that bonds have during bear markets for stocks.

Mr. Key began his career at the South Carolina National Bank as a Corporate Banker and later moved to First Union Bank where he created and managed the Private Banking Group in Columbia, South Carolina. He subsequently served as Treasurer of The Seibels Bruce Group, a property and casualty insurance company. Mr. Key joined CCM Investment Advisers in 1998 and his responsibilities include strategic organization oversight of the firm, management of client portfolios, marketing and fundamental research in the finance and REIT sectors. In addition, he serves as the Fixed Income Strategist for the firm. Mr. Key was graduated from Furman University and received his MBA from the University of South Carolina in 1982. He is a CFA Charterholder, a former Certified Cash Manager, has served as an adjunct professor of finance at the University of South Carolina and has provided expert consultation on legal matters involving lending and securities. Mr. Key is a past President of the CFA Society of South Carolina.