MARKET SUMMARY: S&P 500 stocks declined 4.8% in the third quarter, marking their third consecutive losing quarter in 2022 and bringing their loss for the year to 23.9%. The culprit continues to be relentless inflation and the Federal Reserve’s aggressive response of multiple .75% interest rate hikes. Stock investors have had little room to hide, as ten of the Index’s eleven industry groups have experienced declines. Even the vaunted mega-cap technology sector has failed to offer support, with the group of Meta, Alphabet, Amazon, Apple and Microsoft declining 35.8% for the year. The only sector with a gain for the year is energy, and as we have discussed in the past, with only a 4% market capitalization share of the S&P 500 its outsized performance barely staunches the bleeding for the market as a whole. 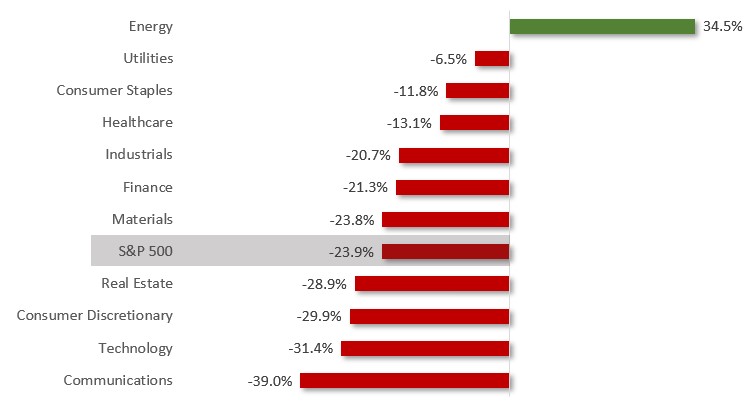 Bonds, as measured by the Barclays Government/Credit Index, declined 4.6% in the third quarter.  Their loss for the year is a staggering 15.1%, placing the bond market is in the midst of its worst decline since 1926 and putting it on pace for its worst year since records began in the late 1700’s. The 2022 bond market has been a brutal shock to yield-hungry investors who have reached to the longer end of the maturity spectrum (ten-plus year maturities) to pick up a small increment in yield. We have discussed at length the folly of this strategy in the past and have been well prepared now that inflation is indeed not dead and interest rates have skyrocketed. Our bond losses are roughly half that of the benchmark index.

ECONOMIC FORECAST: Despite the negative print in the first two quarter’s GDP, there are still many positive signs in the U.S. economic picture. Most of the drop this year has been concentrated in construction, as higher interest rates and input prices dampened demand. Employment continues to strengthen as pandemic savings wane, leading more people to seek work. Wage gains have been healthy but not so high as to flame inflation further. Recessions are always accompanied by rising unemployment, and this is not happening. September consumer confidence exceeded the highest estimate as people are sensing a shift in the outlook for the last part of the year. Outside of a few healthy downturns in overheated industries, it is difficult to find economic weakness. As we have written many times, the most significant risk to the economy is an overaggressive Fed policy that drives the US into a recession.

While it is easy to Monday morning quarterback, the fact remains that the Fed has been wrong about inflation since the outset of the pandemic. Problematic inflation is primarily a psychological phenomenon where higher prices flame demand leading to even higher prices. Nothing could be further from what is happening in the US. Lumber prices are now below pre-pandemic levels. Rents fell slightly in the most recent surveys, which were expected to surge through next year. Used car prices are off 13% this year alone. U.S. inflation has fallen from 9.1% to 8.3% over the past three months. More importantly, falling inflation expectations are nearing the Fed’s 2% target, yet they continue with aggressive rate hikes. Thankfully, we have sensed a shift in rhetoric over the past week that they are beginning to heed the market’s warning. We can therefore expect calmer waters throughout the rest of the year.

FIXED INCOME STRATEGY: Bond investors continued to get hammered as the Fed piled on two 0.75% increases in the Fed Funds target rate during the third quarter. The current range is 3.00% – 3.25%, well above the 0.00% – 0.25% range at the beginning of the year. The expectation is that there is more to come, as the two-year Treasury now sports a yield of 4.3%. Investors are also signaling that the rate increases will have a dampening effect on the economy as the yield on the ten-year Treasury stands at 3.8%. Conditions such as this where short-term rates are higher than those at the longer end of the maturity spectrum is referred to as an “inverted yield curve”. It has often preceded recessions in the past.

CCM’s strategy throughout the low-rate environment preceding the increases has been to limit risk in bond portfolios by avoiding longer-term bonds. These issues lose more value in rising interest environments than bonds with shorter maturities. The strategy has been very effective, and we plan to continue until yields become more attractive.

EQUITY STRATEGY: It was a wild quarter for equity markets with higher volatility driven primarily by a changing Fed narrative. Investors wagered that patience by policymakers would allow the U.S. to escape a recession that frequently follows Fed rate hikes. Hopefulness led to despair after the Fed Chairman gave the most hawkish speech of his tenure leading markets to give back all their earlier gains. We expect easing inflationary pressures and capitulation soon by the Fed to a more dovish tone, providing a supportive backdrop for equity performance moving forward.

Despite the increasingly loud calls for a U.S. recession, we are not seeing it in our research. While off slightly from the highs, earnings projections still show gains over the record 2021 levels. Margins held up smartly during the latest earnings season, although we expect some compression from their record highs. Management continues to make capital investments and has yet to fully reap the benefits of productivity enhancements made during the pandemic—all hopeful signs for recovery in the year’s final quarter.

While we are primarily constructive in our outlook, equities face several headwinds. The good news is that most are improving or can be mitigated with the right mix of investments. The most significant impediment equities face is surging interest rates. Bond yields will begin to fall from current levels and then stabilize throughout the remainder of the year. Next, a strong dollar has made U.S. exports more expensive and thus hurt the profits of multinational corporations. CCM’s portfolio focuses on firms that generate most of their revenues domestically and should perform well should dollar strength continue. Lastly, valuations that surged to multi-decade highs during the pandemic have receded to a more reasonable level. Trailing and forward P/E ratios are now slightly below their 30-year averages. We remain optimistic that markets will stabilize and move higher through the remainder of the year.

ASSET ALLOCATION: We are grateful for the signal we received from our asset allocation system in March to reduce equity exposure in balanced accounts, but with an historic double-digit decline in the bond market there were no opportunities to fully insulate the proceeds from the stock sales. We were able to protect principal on a relative basis, though, by re-investing in bonds with short two- to five-year maturities. The pronounced rise in interest rates this year has increased the appeal of bonds while stocks have become more attractive due to improving valuation metrics (with the price/earnings multiple for the S&P 500 now standing at a quite reasonable 15.5x). The net effect is no real change in our asset allocation model, which still indicates maintaining only a modest overweighting in high quality stocks.

During this time of unprecedented unrest for both the stock and bond markets, our long-standing investing dictate of “patience and discipline” is of utmost importance. For the six recessions since 1980, the average peak loss for stocks was 30.9%, while the average rate of return during the each of the full recession cycles was a decline of only 4.9%. While we believe any recession will turn out to be a mild one, with stocks already off 26% from their high the bulk of the damage has already been done. We again stress how critical the importance of maintaining a long-term investing posture while the economy regains its footing; investors are seldom rewarded for dumping stocks at bargain prices when the markets are in turmoil. 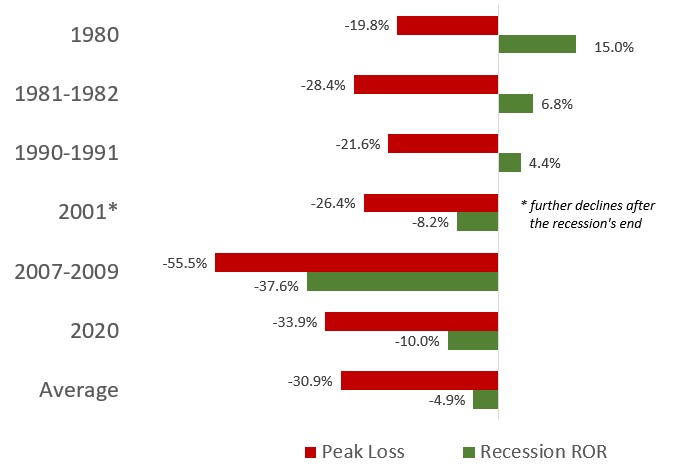