As control of the global pandemic is underway and case numbers are turning lower, rising interest rates due to a corresponding increase in economic activity and inflation are once again at the forefront of our concerns. Such changes, at least temporarily, tend to unsettle equity markets and trigger certain sector rotations. Historically, though, rising interest rates tend to coincide with higher rather than lower equity prices.

Let’s begin with the interaction of interest rates and equities from a valuation standpoint. Academia would suggest that as interest rates go up equity prices should go down, simply by discounting the future cash flows at the new higher rate. While this seems appropriate, such a thesis disregards the fact that, in general, higher rates are accompanied with accelerated earnings growth and expanding economic conditions.

During these times of changing rates, we would expect to see certain market segments performing well while others perform notably worse. These tend to take shape in defensive/high dividend stocks suffering, while banks/industrials tend to outperform. Such sector rotations already seem to be underway, as consumer staples and utilities have underperformed the index thus far year to date.

When examining past periods of rising interest rates the performance of equities tends to be more positive than not. Our dataset, which expands from 1946 to present, examines the 30-Year Treasury Yield and the S&P 500 Total Return (annualized). When examining these periods, on average, a 1.9% increase in interest rates corresponds with an increase of 16.5% for equities (see graphic below). 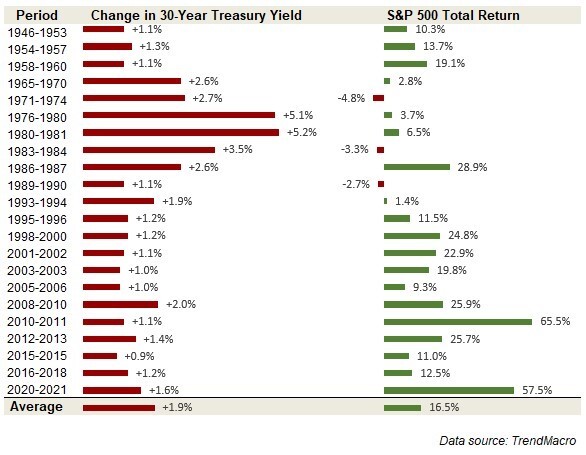 While there have been a few instances when higher rates coincided with subpar returns and lower valuations, particularly during the 1970s and 80s, those rate environments were much different to what we find ourselves in today. Prevailing interest rates during those times tended to be much higher than today’s low levels, and historically, when interest rates rise from lower levels stock valuations also tend to rise. So, while certain sectors may not fair as well as others, the overall market should follow along with rates until higher rates ultimately smother the economic recovery.

About the Author: Austin S. Fulmer

Mr. Fulmer joined CCM Investment Advisers in 2011 after graduating from the University of South Carolina, Moore School of Business with a Bachelor of Science Degree in Business Administration with an emphasis in Finance. Prior to graduating Mr. Fulmer served as a research analyst intern for CCM. Mr. Fulmer is the firm’s MIS Director. His other responsibilities at CCM include portfolio management, equity research and analysis, and fundamental research on the communication services and utilities sectors.