The stock market is heavily seasonally influenced in the third quarter, as summer vacations result in light trading volume.  As a result, third quarter performance is generally anemic.  Given the history, the third quarter of 2019 was quite decent, with stocks posting a total return of 1.7%.  Under the hood, there was a seismic shift in market leadership that provided great spectacle for market professionals.  Most prevalent of all was the rotation out of the market’s past winners (aka “momentum” stocks) and into past laggards in the value space.

For the past ten years-plus since the Great Recession growth shares have handily outperformed the market, with growth returning 15.7% annually versus 12.3% for value shares.  In September, though, there was a significant shift from growth/momentum into stodgier value shares.  Wall Street rarely misses the opportunity for a good buzzword, and the reversal in performance is referred to as the “Great Rotation”.  For the month of September, growth shares returned only 0.3% versus robust 3.7% performance for value shares.

The true impetus for the move is questionable, but two factors offer the best explanation.  First, interest rates backed up significantly from their lows, as economic fundamentals showed pronounced signs of improvement during the third quarter.  Interest rate “spreads” (the difference between short- term and long-term interest rates) widened as well.  This is conducive for the fundamentals of banking shares, and the Finance sector was a beneficiary.  Second, the attack on Saudi Arabia’s oil facilities on September 14 created a short-term spike in oil prices and a quick move of nearly 7% for the Energy group.  The end result was a pronounced market move from old winners into select positions in the value sector.

What Wall Street largely overlooked in their dive into the quarter’s performance narrative was a distinct degradation in the “FANG Effect” (a topic we covered in a recent Commentary article).  To summarize, the “FANG Effect” (or more accurately “FANMAG Effect”) refers to the outsized effect on the S&P 500 Index of Facebook, Amazon, Netflix, Microsoft, Apple and Google.  Since early May, though, investors have begun to sour on the shares.  The biggest reason has been political “tech-lash” against the shares, followed by competitive concerns (mainly for Netflix).

On the political front there has been much heat placed on large-cap Tech from both sides of the political spectrum.  On September 24 alone, President Trump’s remarks during a speech at the United Nations were enough to knock wind from the entire group.  His comments that the companies were “acquiring immense power over what we can see and over what we are allowed to say,” and that “a free society cannot allow social-media giants to silence the voices of the people” led to a sell-off in FANMAG shares that cost investors $58 billion.

The biggest loser by far among the FANMAG group has been Netflix.  Since they are in a much more competitive business environment they have not been the biggest recipient of the “tech-lash”, where the topic has generally centered on monopoly and free speech concerns.  However, their issues are largely because they are in a very competitive environment – going toe to toe with the likes of Disney, Apple, NBC, Amazon and others.   Since May 1st Netflix shares have been in a near free-fall, declining nearly 28%: 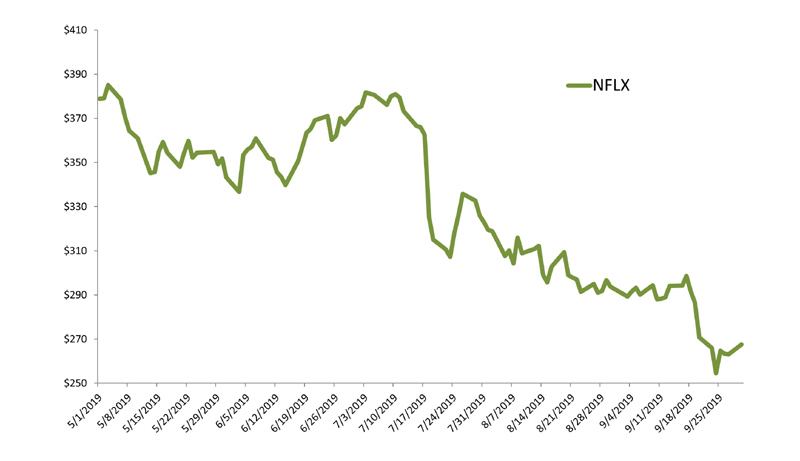 In addition to Netflix, Amazon and Facebook have suffered as well.  Since May 1 Amazon has shed 10% while Facebook has declined 8%.  Although Apple, Google and Microsoft have performed reasonably well, the group of six FANMAG stocks declined 4.3%.

The most obvious impact for diversified active investment managers such as CCM was a respite from the FANMAG/momentum bias that has so heavily skewed performance for the benchmark S&P 500 Index since 2009. At CCM we gained substantial relative strength versus the Index in the third quarter.  Looking ahead, it would be naive to assume the third quarter’s “Great Rotation” will continue.  Since the Financial Crisis there has been a deserved attraction for “quality” shares, and in spite of their heady valuations FANG and other momentum stocks are still some of the best companies trading in the market.  Should the rotation continue, though, the implications for broader market performance are not constructive.  Despite the rotation, market leadership for 2019 has still been dominated by Technology and the interest rate sensitives (REIT’s, Utilities and Consumer Staples predominately).  Should tech and momentum shares be stymied, we may have seen the highs for the stock market this year unless another group emerges to carry the leadership baton.