BACKGROUND:  “FANG” is an investing acronym which describes the outsized effect of a select group of large technology stocks on the S&P 500 stock index.  FANG was coined in 2013 by Jim Cramer, the host of CNBC’s “Mad Money”.  At the time, the term referred to the stock of Facebook, Amazon, Netflix and Google.  In the following years, the term was modified to “FAANG”, as the domination of Apple stock on the S&P 500’s performance readily obvious (20.5% ROR for AAPL vs. 13.8% for the S&P since 2012).  Recently, Microsoft was added to the mix, as its 27.8% annualized return for 2012-present was impossible to overlook – particularly as it led to its current position as the most valuable company in the U.S. equity market.  The acronym has thus evolved to “FAANMG” or “FAANG+M”, but we prefer “FANMAG” due to the apt implication of the idol-worshipping behavior of its devotees, and we will refer to it as such for the remainder of this study.

THE FANMAG EFFECT:  CCM research reveals the FANG effect emerging in 2012 – the same year Facebook went public.  By the end of 2012, the FANMAG stocks held the following capitalization shares in the S&P 500: 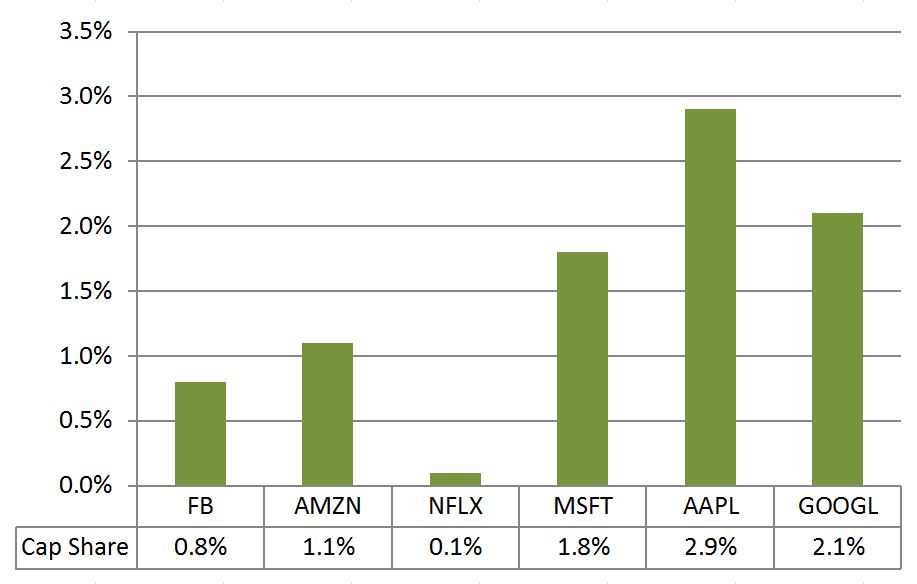 At the time, Apple was the largest U.S. stock, followed by Exxon, Google and Walmart, and comprised a hefty 2.9% of the S&P 500.  Microsoft and Google were approximate 2% positions in the Index, and Facebook and Amazon were roughly 1% each.  Netflix was still in its infancy, and comprised only 0.1% of the Index.  In 2012 the stocks returned 23.2% as a group, well in excess of the S&P 500’s 16.0% return.  That paled to 2013, when the group of six stocks returned a stunning 46.0%, led by an audacious 298% return for Netflix alone.   The effect of these stocks on the Index was not missed by investing professionals such as CCM, but credit Mr. Cramer for publicizing the fact with the investing public. 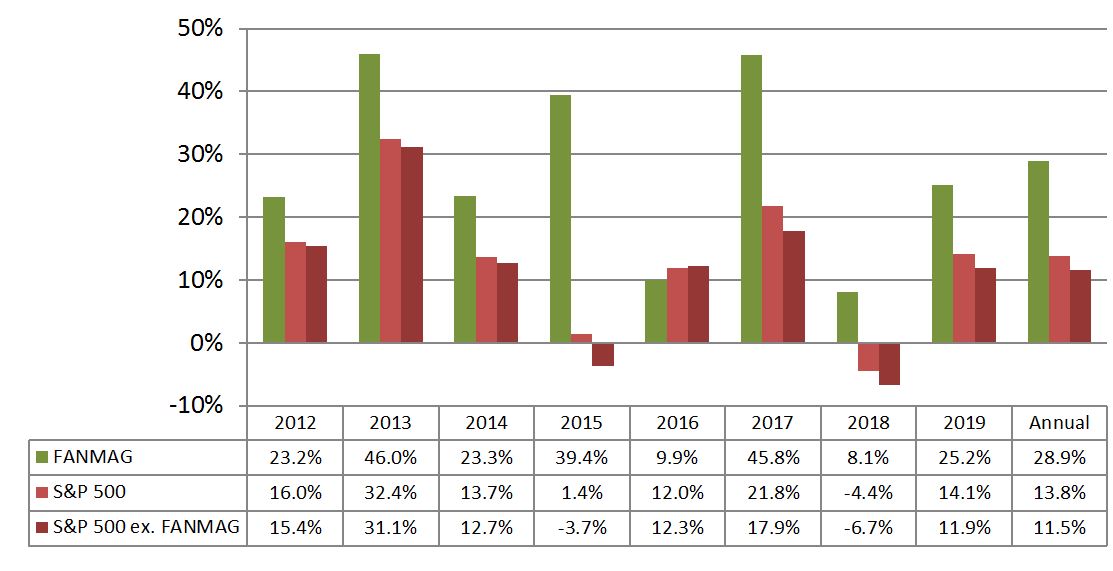 INDEX IMPLICATIONS:  For investors using the S&P 500 stock index as a benchmark, the implications are profound.  The Index is “capitalization weighted”, meaning the returns for the 500 stocks that comprise the Index are weighted by their capitalization share.  That means that the performance for the largest stock in the index (currently Microsoft with a 4.0% weight) has a much larger effect on the Index’s return than stocks at the bottom of the index (weighted at a barely measurable .03%).  In fact, the top 50 names in the S&P 500 are responsible for 50% of the Index’s return.

For FANMAG’s effect on the Index, consider their present index weights.  After a stunning 7 ½ year run of 28.9% annual group returns, their market capitalizations in the Index have grown to gargantuan proportions: 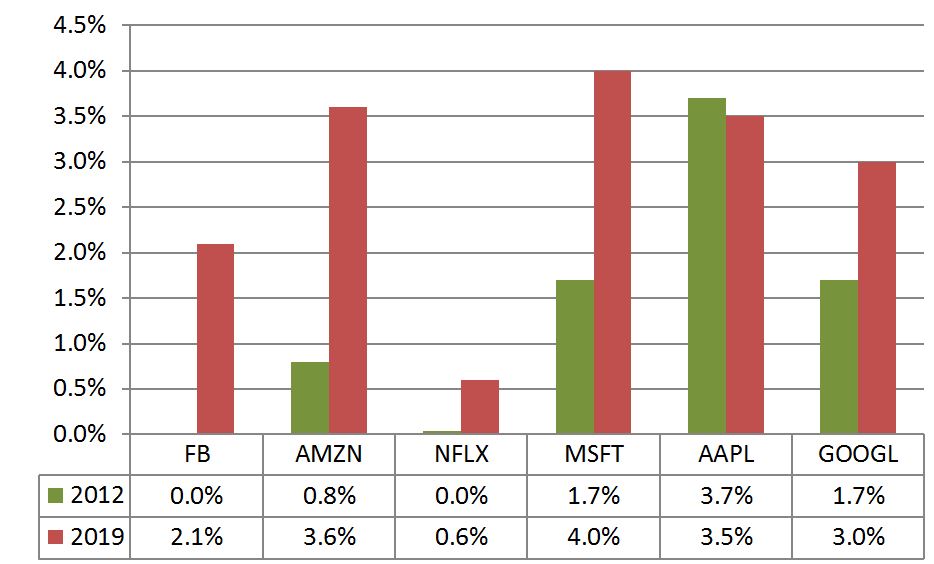 The group, once a manageable 7.9% of the Index in 2012, now comprises 16.8% of the S&P 500.  It once seemed unfathomable that six individual securities could have such a dominating effect on an index as large as the S&P 500.  However, those six stocks now carry the same index weight as the bottom 285 stocks in the S&P 500 ranked by market capitalization.

INVESTMENT IMPLICATIONS:  As we have mentioned in previous editions of the CCM Market Commentary, the FANMAG effect creates a very difficult performance hurdle for diversified managers such as CCM – particularly since our security selection process is dictated by relative value.  Regarding diversity, we believe a stock portfolio comprised of 50 names is necessary to adequately reduce security-specific risk.  With a 50 stock portfolio, a “full” position within our equity portfolio is therefore a 2% “full” position.  For us to match the FANMAG weighting of 16.8% of the S&P 500 we would therefore have to own all six of the securities and target each at almost 3%.  This is the equivalent of “full and a half” positions in each security.  We believe this would be a direct violation of our diversification pledge to our investors.

As a relative value manager it is a stretch for us to even own four of the FANMAG components, and certainly not at elevated targets.  In late 2018 we removed Facebook from our model portfolio due to high valuation (P/E around 30x, regulatory concerns, privacy breaches and fears of declining engagement from its user base).  These concerns are widely publicized and are by no means ours alone, but due to the almost cult-like draw of the FANMAG stocks Facebook has delivered a 35% return for the year (although it has suffered during the recent sell-off).  Netflix has been out of the question for us due to excessive valuation since day one.  It currently sports an outlandish price/earnings multiple of 91x – and this is after a recent 23% correction due to increased competition.  While we admire the quality of their product, it is not a stock we prefer to own.

What target conservative 2-3% positions in Amazon, Apple, Google and Microsoft, comprising a total portfolio weighting of 9.8%.  This is well underweight their 16.8% representation in the benchmark S&P 500 index.  The end result is the following – as long as the FANMAG effect remains in effect active stock managers will likely lag the cap-weighted S&P 500 index due to its cap-weighted design.  Since 2012, the FANMAG effect on the Index has been +2.3% per year (13.8% for the S&P 500 including FANMAG minus 11.5% for the S&P 500 excluding FANMAG).  With roughly a 60% CCM weighting in FANMAG the effect on our performance is not as extreme, but we do sacrifice about 1.5% for remaining true to our time-proven discipline.

As we have learned in past times of market excess, we tend to make up for these irregularities when the bubble bursts.  With the exception of Apple, the other five FANMAG members trade at 25 times forward earnings and above (well above for NFLX).  Even with their exceptional growth record these valuations are extremely hard to justify.  Most tellingly, from our past research on S&P 500 industry groups (e.g. industrials, health care, technology) we have discovered a “central tendency” for the group’s capitalization share to converge on its “earnings share” – that is, the group’s proportion of total S&P 500 earnings.  For FANMAG, despite a 16.8% weighting in the Index, its share of earnings is only 9.9%.  There is clearly a disconnect between the market’s continued affinity for these names and their intrinsic valuation.  It is only a matter of time before the pricing error is corrected by the market.