Market Summary:  The stock market is seasonally influenced in the third quarter, as summer vacations result in light trading volume and generally anemic price action.  Given the history, the third quarter of 2019 was quite decent, with S&P 500 stocks posting a total return of 1.7%.  That brings their return for the year to a stout 20.6%.

Despite the quarter’s modest return, there was a seismic shift in market leadership during the quarter that provided great spectacle for market professionals.  Most prevalent of all was the so-called “great rotation” out of the market’s past winners (aka “momentum” stocks) and into past laggards in the value space.  In addition, FANG (or more accurately, FANMAG) stocks lost considerable relative strength.  The result was a respite from the FANG/momentum bias that has so heavily skewed performance for the benchmark S&P 500 index.  With the levelling of the playing field we were able to handily outperform the Index during the quarter.

Interest rates continued their 2019 descent during the third quarter, with the 10-year Treasury reaching a low of 1.46% on September 3.  Domestic economic concerns were once again the primary culprit – clearly evidenced by declines in the Leading Index and ISM surveys.  In Europe, the situation is dire, with the economic behemoth Germany teetering on the edge of recession.  As has been the long-standing case, zero or below-zero yields there have “tethered” our rates to levels lower than justified by the fundamentals.  Due to both factors the benchmark Barclays Government/Credit Index gained 2.6% during the quarter, padding the 2019 return for bonds to a most generous 9.7%.

Economic Forecast:  The U.S. economy began the year after 2.9% annual growth in 2018 – the highest level since 2015.  In the first quarter of 2019 the economy followed with solid growth of 3.1%.  However, the second quarter slowed to a growth rate of only 2%, and according to both the Fed’s GDPNow model and our own Economic Strength Index, third quarter growth is estimated to be around 1.8-2.0%.

The best explanations for the return to “New Normal” 2% growth are the one-two punch of the expiration of the boost from 2018 tax reform as well as the ongoing trade war.  The economic effect is most prevalent in the manufacturing sector, with the ISM Manufacturing PMI survey declining rapidly to a reading of 47.8 – below the baseline of 50 for boom versus bust. 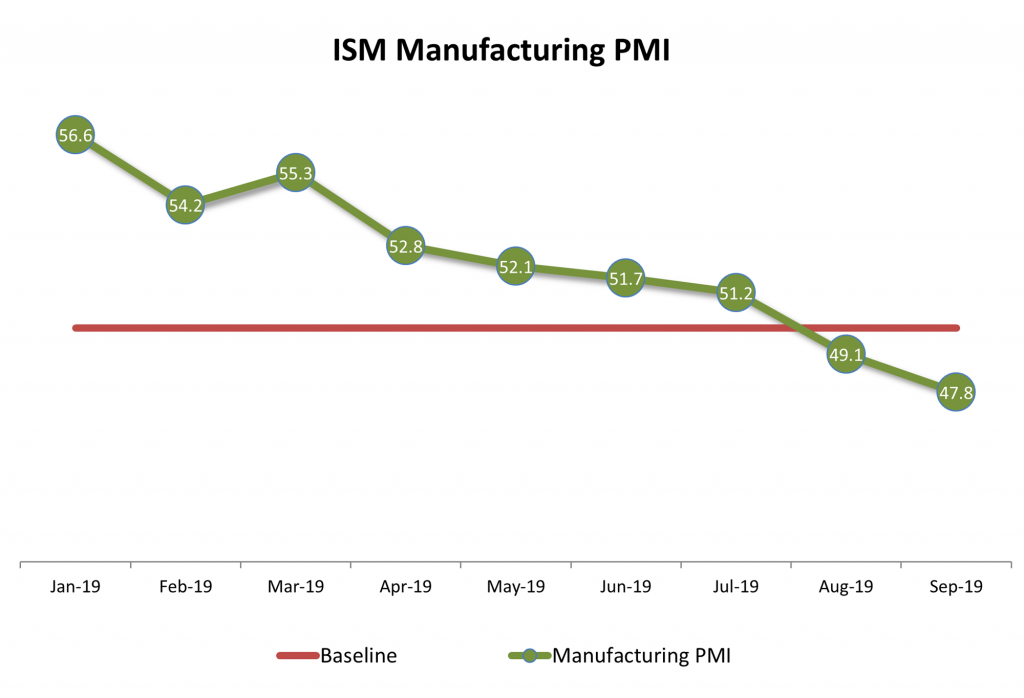 It is clear the manufacturing sector’s woes are related to trade, as supply channels have been disrupted by tariffs and sales are being thwarted by a stronger dollar.  Thankfully, though, manufacturing’s share of the U.S. economy is rather small, contributing roughly 12% towards GDP.  Two-thirds of the economy is attributable to the consumer sector, where the situation is much brighter.  September employment came in at +136k, bringing the unemployment rate down to 3.5%, and wage gains averaged a healthy 2.9%.  With the employment situation in such solid shape it is not surprising the consumer is quite confident.  The Conference Board’s consumer confidence reading stands at 125.1, within the high range of the last two years that rivals the euphoria of the early 2000’s.

The remaining pillars of the economy are trade, government spending and investment.  Obviously the trade balance is directly affected by the ongoing hostilities, and business investment has been negatively affected by the trade war as well due to the detrimental effect on business confidence.  Meanwhile, the government’s spendthrift ways continue, juicing the economy along the way.  So in sum, two-thirds of the economy is on solid footing while the other third is in murky territory.  We will place our bets on the consumer, and expect continued modest economic growth of 2%, with 2020 being greatly determined by the path of trade negotiations.  Our baseline expectation is for a tentative election-year truce, and for the cessation in hostilities to result in only 30% odds for a mild 2020 recession.  We will keep a very close eye on the employment picture, as the U.S. has never entered a recession while unemployment is falling.

Fixed Income Strategy:  Yields have declined to the point where we are almost tempted by money market yields – currently exceeding those of the 10-year Treasury.  However, high cash rates will likely not last very long, as the Federal Reserve will systematically cut the Funds rate, perhaps to 1% or less.  Also, in the case that interest rates descend to zero (or even join our European neighbors in the negative interest rate club), it is important to have at least some degree of a duration bet in play.  The tempering argument is our belief that fair value for 10-year Treasury yields is somewhere around 2.5% (2% for prevailing inflation plus a small degree of real return) and that the market is unrealistically pessimistic given a relatively sound economy.  Therefore, we will continue to maintain a defensive maturity structure with a duration target of 3-4 years versus a much riskier measure of 7.1 years for the benchmark Barclays Government/Credit Index.  Under this strategy we typically exceed the 2.1% yield of the Index while only being exposed to half of the interest rate risk.

Equity Strategy:  The group of six FANG stocks that have had such a profound impact on the S&P 500 index began to break down versus the market in early May.  The biggest decliner is Netflix, as deep-pocketed competitors such as Apple, Disney, NBC and Amazon have begun to muscle into their space.  The stock is since down 28% as a result.  For Facebook and Amazon, government “techlash” has led to respective declines of 7.9% and 9.9%.  September also demarked the “great rotation” from momentum stocks into names in the value space where we place a great amount of focus.  For the month of September, growth shares returned only 0.3% versus robust 3.7% performance for value shares.  The combined effect was a very conducive environment for performance, and we accumulated significant relative strength versus the benchmark index during the quarter.

Looking ahead, it would be naive to assume the trend continues in force.  Since the Financial Crisis there has been a deserved attraction to “quality” shares, and despite of their heady valuations, FANG and other momentum stocks are still some of the best companies trading in the market.  We will maintain FANG exposure of approximately 10% from the best of the group.  This is below their 16.7% share of the Index, but roughly in line with their share of S&P earnings – where market cap shares historically gravitate to over the long term.

Asset Allocation:  Interest rates are so close to zero there is frankly not much opportunity remaining for appreciation in bonds.  Meanwhile, although stocks have rocketed this year, they are barely above their previous high in January 2018.  With the bond market continuing its stretch further into overvalued territory while the stock market has been waylaid by the trade war for nineteen months, it is no surprise the equity risk premium (ERP) still points decidedly in favor of stock exposure.  In fact, CCM’s ERP model suggests 6.5% in excess return offered by stocks over bonds – easily two standard deviations above the historic 2.9% baseline.  Even in the wake of today’s high levels of geopolitical unrest it is still an easy decision to continue maintaining a modest overweight position in quality domestic equity shares.