MARKET RECAP:  The first half of 2020 was a wild ride for stock investors.  The disastrous first quarter loss of 19.6% for the S&P 500 index marked an end for the longest U.S. bull market run in history.  It only took sixteen days to kill the bull, marking its quickest descent since 1933.  Stocks bottomed on March 23rd, down 34% from their high.  It ended up being the shortest bear market since 1929, though, as stocks advanced steadily before finally stalling in early June.  For the second quarter of 2020, the S&P 500 posted a 20.5% total return, narrowing the stock market’s loss for the year to 3.1%.

Given a global pandemic that has infected over 2.5 million Americans and resulted in the loss of over 125,000 lives, the greatest economic shock since the Great Depression and widespread domestic unrest in the street, it is puzzling that stocks have been resilient enough to post only a modest single-digit loss.  There are two factors in play.  For one, an unprecedented amount of federal stimulus simply had to find a home.  Secondly, the benchmark S&P 500 return has been skewed so severely by a handful of large technology stocks that it is not accurately representative of typical stock performance.

FEDERAL STIMULUS:  The Fed has pumped roughly $3 trillion into the U.S. economy since the virus emerged on U.S. soil.  The CARES Act injected another $3 trillion directly into American’s pockets.  The total boost to the enfeebled economy amounts to about one third of annual US GDP.  As can been seen in this chart from the Fed, the effect is readily evident in the enormous growth in U.S. money supply:

Money simply must find a home, and with consumption crimped by the U.S. quarantine, bonds offering yields of less than 1% and cash yielding effectively zero, stocks emerged as the prime benefactor.

Much has been written of bored millennials sitting at home and day trading their $1200 relief checks on free trading sites such as Robinhood.  This is more than mere anecdote.  In March, Robinhood’s net deposits were seventeen times their normal volume, including a rash of deposits in precise $1200 or $2400 increments.  The market effect has been profound, including a nearly 900% rally for bankrupt Hertz in only two weeks.  In a $500 million equity sale for recapitalization, Hertz warned it was almost certain investors would lose all of their investment, yet they came back for more.  This flies in the face of sound investment reason.

LARGE CAP TECH/FANG EFFECT:  By far the biggest winners in the U.S. stock market for the first half of 2020 have been the elite group of the largest technology companies – Facebook, Amazon, Apple, Microsoft, Netflix and Google.  We have written at length on this “FANG” effect, as it has had a pervasive effect on the S&P 500 index since 2010.  In 2020 it has shifted into hyper drive.  The group of stocks has rallied over 26% for the year, and its market capitalization has grown to an outlandish 25% of a five hundred stock index (up from 8% in 2013). 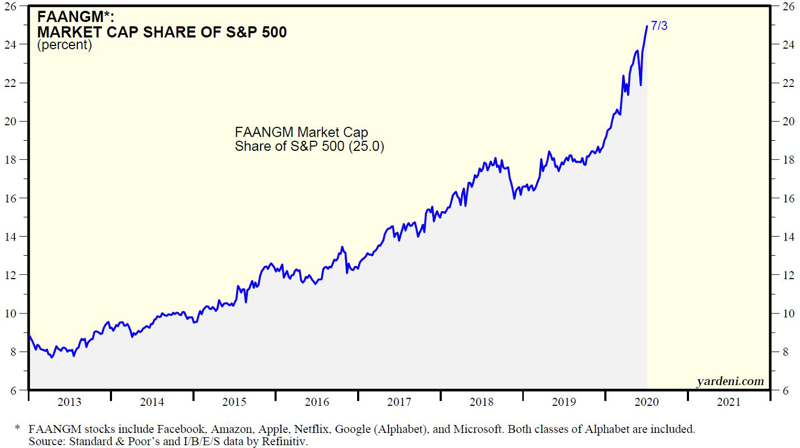 There is no question that these are some of the best companies in the world and each is uniquely suited to adapt to a post-virus landscape.  However, they also face their own challenges, including new expense structures (e.g. Amazon virus screening for employees) and threats to their income streams (e.g. declining corporate advertising budgets for Facebook and Google).  How these firms could suddenly be 26% more valuable in the face of a recession of epic proportion is a bit of a mystery.  What is not mysterious is the detrimental effect the run has had on their valuations.  With a forward price/earnings multiple of 21.5x, the S&P is expensive enough in its own right.  Each of the FANG stocks trades in excess of that, and as a group commands a whopping 40x P/E multiple.  In the case of Amazon, valuation is severely stretched, with a forward P/E of 98x: 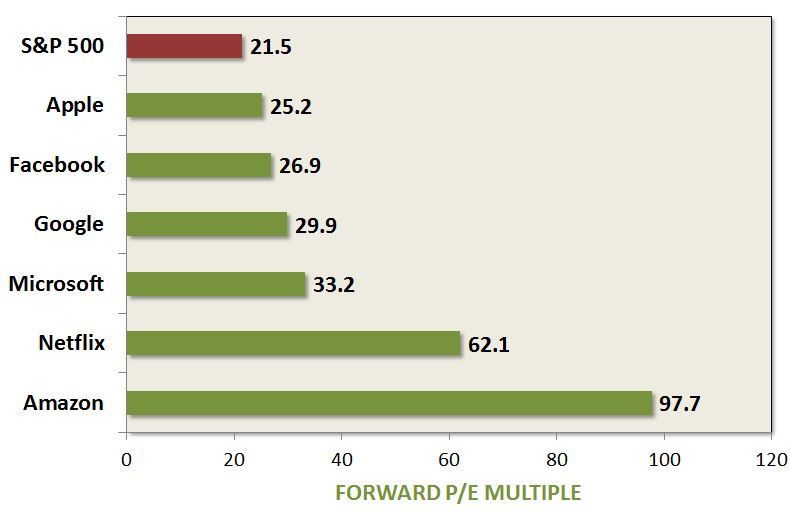 INDUSTRY PERFORMANCE:  Out of the eleven S&P 500 sectors, only four have managed to best the index, largely due to the FANG effect.  Not surprisingly, the top group for the year has been technology.  Although there is a pattern of strength across the sector, it has been distorted by FANG components Apple and Microsoft (up 25% and 30% for the year respectively).  Even though the story of the retailers and restaurants is dismal, the second best performer has been the consumer discretionary sector.  The reason for the disconnect is its inclusion of Amazon, with a 50% capitalization share of the sector and a 49% gain for the year.  The communications sector, the number three performer, shares the same FANG effect as tech and consumer discretionary, with 50% of the sector’s weighting being Facebook and Google.  The fourth best performer, healthcare, has succeeded on its own merits – largely the prospect of COVID treatments/vaccines from the biotech and pharmaceutical companies.  It has posted a decline of only 0.8% for the year.

Of the seven losing groups this year, energy has by far seen the largest decline – falling 35%.  With oil prices once trading at negative prices this year this is not surprising.  The finance sector has also had a terrible year, posting a loss of 24%.  Though the banks are much better capitalized than in 2008-2009, the system did teeter precariously in March.  Investors’ memories remain very keen to the dark days of the financial crisis and they dumped the shares in mass.  Other decliners of note include industrials and materials, both highly economically sensitive and globally exposed. 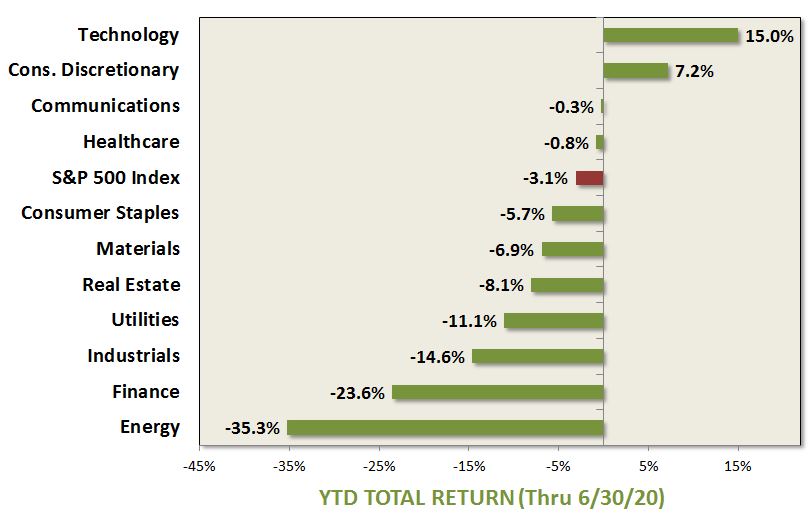 SMALL/MID-CAP PERFORMANCE:  The S&P 500 index measures the performance for the largest U.S. stocks (large-caps).  Moving into the S&P 400 (mid-caps) and the S&P 600 (small-caps) space, performance has been even drearier.  Smaller firms typically do not sport the same solid balance sheets as their larger peers and they often have less access to favorable financing.  They are therefore considered riskier plays, and suffered during a “risk off” investing climate in 2020.  For the first half of the year mid-cap stocks declined 13%.  Small-caps were off 19%.

GROWTH VS. VALUE PERFORMANCE:  Each of the three S&P stock indices (500/400/600) is divided into both growth and value categories.  Growth shares are dominated by the technology group, which is the year’s number one performing S&P industry group, and 40.7% of the growth index is FANG stocks.  Value shares are tilted toward lagging energy and financial shares.  As expected, growth shares have trounced their value counterparts for the year.  Large cap growth has posted a gain of 8%, while large cap value has declined 16%, an historic 24% style divergence.

BOTTOM LINE:  By far the largest story of 2020 for stocks has been the FANG juggernaut.  With a 26% return for the year for the six large-cap tech stocks and an index share of 25%, they have skewed a 500-stock index upward by nearly 7% (rate of return times share of index).  This has distorted the S&P 500 index return dramatically, and belies the true nature of the 2020 stock market.  For an accurate gauge for “average” stock performance at this juncture, rely on the S&P 500 Equal Weighted index.  Simply put, it is the average return for each of the 500 index constituents and is not affected by each constituent’s size.  For the first half of 2020, the equal weight index has posted a loss of 10.8%.

Although it was partly due to the FANG effect, the technology group has survived the crisis largely unscathed.  This has further buoyed growth shares.  Due to retail investor speculation, a collection of “zombie” companies has somehow managed to post triple-digit gains in very short amounts time.  The big losers for the year include battered energy and finance shares, as well as the globally-focused and economically sensitive industrials and materials sectors.  Small- and mid-cap companies have significantly underperformed their larger peers.  As displayed in the graphic below, the end result is dizzying.  2020 is on pace to go down as one of the most remarkably divergent markets in U.S. history. 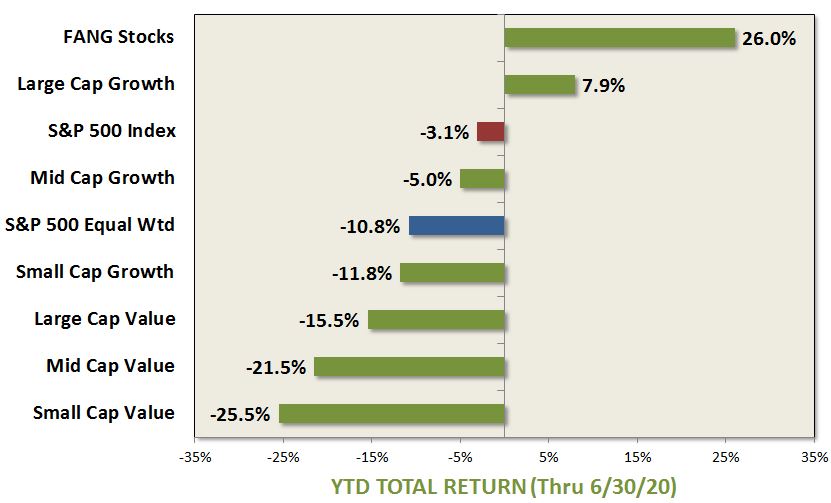