Since it has had such a profound effect on S&P 500 Index performance over the past eight years, the topic of FANG shares has received considerable press (including our own publications).  This week, Bloomberg News released a report pointing out the fact that just two stocks, Apple and Microsoft, now have a bigger combined market capitalization than the entire S&P 500 Consumer Staples sector.  It would be one thing if it was a small sector such as Materials, Utilities or Real Estate, but the Consumer Staples sector contains such behemoths as Walmart, Procter & Gamble, Coca Cola, Pepsi, and 29 other high profile consumer goods companies.

Frankly, we were a bit suspicious of the report, and verified their statement through our data sources.  As you can see below, Apple and Microsoft continue to jockey for the biggest names in the S&P 500, with respective capitalization shares around 4.1%.  Together, the two are responsible for 8.18% of the Index’s performance calculation.  Meanwhile, the 33 stocks of the Consumer Staples sector carry a combined market cap weighting of 8.08%: 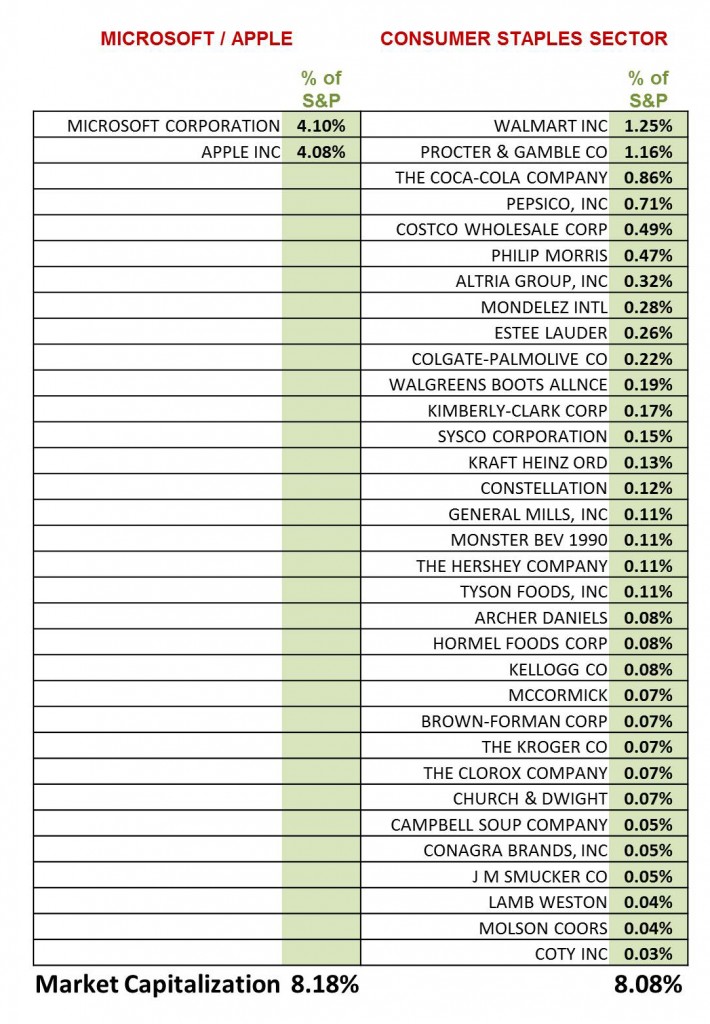 Hard to believe but true – two individual securities now carry more weight in the S&P 500 than an entire sector (and not a small one at that).  As the old saying goes, “no tree can grow to heaven”.  At some point the phenomena of the rich stocks only getting richer will likely succumb to their inflated valuations.  We are hopeful the recent market shift from momentum names such as Apple and Microsoft and into more value-oriented names will continue.  It has been a major performance driver for us of late, and a reason we recently achieved Informa/PSN Top Gun 1-Star status for our Equity strategy during the third quarter of 2019.