MARKET SUMMARY:   Stocks opened the fourth quarter with sideways trading in October, and then began a powerful November rally, propelled by a market-friendly election, as well as booster shots from the regulatory approval of three COVID vaccines. In December, the trend was investors’ friend, with considerable gains despite raucous political noise. In the end, the benchmark S&P 500 leapt 10.6% in the fourth quarter. Stocks finished 2020 with a total return of 18.4% – remarkably generous given the backdrop of a deadly global pandemic and near economic collapse. The key factor was unprecedented fiscal and monetary stimulus from the Federal government, with returns then amplified by an army of speculators on such new platforms as Robinhood. Unfortunately, though, much of the gains were illusory, as the common equity indices malfunctioned due to the outsized performance of the largest of the large companies.

Though logic would dictate a cautious investing approach to a virus-ravaged economy, a helicopter load of $1200 stimulus checks and the lure of free online trading made 2020 the year of the swashbuckling day trader. On some days the sect was responsible for 25% of total trading volume, goosing highly speculative shares such as Kodak and Hertz (now bankrupt and delisted) to triple-digit returns over the course of a single day. The poster child for speculative excess was Tesla, which was up 750% in 2020. Despite their small market share of world auto sales, Tesla is now larger in market cap than the top ten auto manufacturers combined and was recently added to the S&P 500 as the fifth largest company in the index.

We have discussed at length the “broken” nature of the S&P 500 index. At year’s end, just three stocks (Apple, Amazon and Microsoft) comprised 16.6% of the market value of the 500-share index. Due to cap weighting of their tremendous 2020 gains, they were ultimately responsible for over half of the index’s entire 2020 return. Furthermore, the largest 35 companies now comprise 50% of the index, while the smallest 250 shares in the index receive only a 10% weighting. We are frankly at a loss in supplying a candidate index for “typical” stock performance for the historically atypical year that was 2020 – even the S&P 500 equal weighted index broke down in the fourth quarter due to its high number of dodgy energy and financial shares.

The 2020 market rewarded growth at any price, and less expensive issues performed poorly. As evidence, note the 10.2% decline in 2020 for the S&P Enhanced Value index (the least expensive 100 names of the S&P 500 based on valuation criteria such as price/earnings). It simply was not an environment where a conservative, valuation-biased philosophy such as CCM’s shines on a relative basis. Perhaps the most comparable bench for us in 2020 is the S&P 500 Dividend Aristocrats, which includes conservative dividend payers from both the growth and value sphere. The index gained 8.7% for the year. 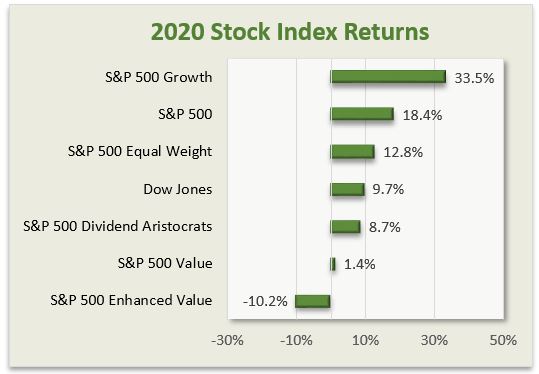 The fourth quarter for the bond market was a near carbon copy of the prior period – unusually stable interest rates for Treasury issues with continued compression in corporate bond yield spreads (the excess yield demanded by investors on riskier corporate debt). This allowed the benchmark Barclays Government/Credit Index to deliver a total return of 0.8% for the fourth quarter. For the year, bonds returned 8.9% on a total return basis, quite lavish given meager coupon income. This marks an impressive one-two punch of performance for bonds in both 2019 and 2020. With yields this close to zero, however, a trifecta in 2021 is highly doubtful – particularly should the uptrend for rates so far in the new year continue its course.

ECONOMIC FORECAST:  2020 was a record-setting year filled with massive economic swings. The lockdown-imposed recession was shockingly deep, but was the shortest on record thanks to fiscal and monetary officials’ swift action to support asset markets and consumers. We expect the predominantly V-shaped economic recovery to continue into 2021, led by wary consumers feeling revitalized to spend. And they have the cash to do it; household balance sheets, already strong going into the crisis, were bolstered by two rounds of fiscal stimulus. With Democrats in control of both houses of Congress, a third round with extended jobless benefits and more support for state and local governments is in the cards. Consumer spending on goods currently exceeds pre-pandemic levels and will likely remain strong into 2021. An accommodative Federal Reserve will provide a powerful tailwind to all sectors of the economy through artificially suppressed interest rates.

The most significant risk to our optimistic 2021 call is an overheating economy that leads to higher inflation. In August, the Federal Reserve announced they would allow higher rates of inflation in the short run while aiming for inflation to average two percent over the longer term. They further painted themselves into a corner by pledging to keep rates near zero until the end of 2023. An improving vaccine rollout, lockdown fatigue, and pent-up demand could conspire to drive consumer spending to levels that push prices higher (i.e. demand-pull inflation), particularly with global supply chains still constrained by the virus. Lastly, a weakening dollar and increased commodity prices will lead to higher import prices. While inflation has been muted so far, expectations embedded in US Treasury TIPS already exceeds the Fed’s 2% target. Labor market slack should protect aggregate prices from moving too high, but we will be watching for dislocations, especially within the more discretionary services sector.

FIXED INCOME STRATEGY:  Fixed income markets enjoyed an exceptional year in 2020 as risk-averse investors and government bond purchases drove Treasury yields to all-time lows. Credit spreads spiked early in the crisis but narrowed markedly after assurances from the Federal Reserve and investors clamoring for incremental yield. Federal Reserve asset purchases are all but certainly suppressing yields below their natural levels. Strong economic growth has historically led to higher interest rates, which we have already seen during the first week of 2021. Treasury 10-year yields increased from 0.9% at year-end to 1.1% on January 8th, a statistically significant move. Due to its high interest rate sensitivity the 30-year Treasury lost 5.2% of its value over the same period. Long duration instruments will be at even greater risk as markets return to their normal supply and demand dynamics. We will continue to emphasize short-dated bonds in portfolios until we are fairly compensated for higher duration risks.

EQUITY STRATEGY:  Last year was a mismatched battle for relative value investing, as S&P Growth shares rocketed 33.5% – dominated of course by the big five technology names. We hesitate to compare the situation to the Tech Bubble of 1999, because in this case the star performers are making real profits. However, valuations for the shares are breathtaking – witness a price/earnings multiple for Amazon of around 100x, 40x for Apple and 35x for Microsoft (not to mention over 1500x for Tesla). However, the group of the highest flyers slowed considerably in the fourth quarter and we were able to make up significant ground in the performance derby. Our incremental shift last quarter from overpriced technology shares into attractively priced dividend payers (particularly in healthcare) has borne substantial fruit.

Looking ahead, our economic forecast is for a 2021 recovery, but equity prices already reflect the occasion. We therefore believe the best risk-adjusted opportunity is within the dividend space. The group has been largely overlooked, even though they yield 3.4% – roughly three and a half times the yield of the 10-year Treasury. We are certainly not advising an “all of the eggs in one basket” strategy and continue to diversify across all eleven S&P industries in both growth and value shares. However, in an environment of stocks doubling over the past five years (15.2% annualized return) and valuations quite taut, we think it prudent to “get paid to wait” should the market return to some sense of normality in 2021.

ASSET ALLOCATION:  Stocks have outperformed bonds in ten of the twelve years since the 2008-2009 Financial Crisis. We are thankful to have trusted our proven asset allocation system and remained overweight stocks in balanced portfolios for the entirety. Currently, stocks are substantially more attractive than bonds, and we are maintaining an overweight target of plus 10-20% equity exposure versus our benchmark. However, much of the valuation discrepancy is because bonds are just so unappealing – with only 1-2% yields they offer scant opportunity for return. On the other hand, it is not like stocks are giveaway cheap. This is a second reason for our recent tilt toward dividends on the equity side of balanced portfolios – the shares act as a “bond proxy”. Although they are still stocks and are not without risk, we feel they offer the opportunity for income return with some appreciation potential while presenting a much lower risk profile than growth shares trading at extended valuations.