MARKET SUMMARY: The first quarter of 2021 continued the prior year’s penchant for dramatics, with the drivers once again coming from the political and COVID fronts. The political highlights were historic, including a disputed Presidential election, disorder at the Capitol and the seismic Senate results from Georgia. Soon thereafter, daily coronavirus cases surged to 200,000-plus highs. Curiously, extreme investing risk-taking remained in vogue despite the turmoil, typified by moonshots for such “meme” stocks as GameStop and AMC Entertainment.

As the quarter progressed, accelerating vaccine distribution, an ensuing decline in U.S. coronavirus cases, and a $1.9 trillion COVID relief plan led to increased optimism for the U.S. economic recovery. Economic growth, coupled with a compromised supply chain, is an ideal recipe for inflation, and in response, the yield on the 10-year Treasury bond swelled during the quarter. Rates nearly doubled, from 0.92% at the start to 1.74% by quarter’s end, bringing them back to where they were before the pandemic. 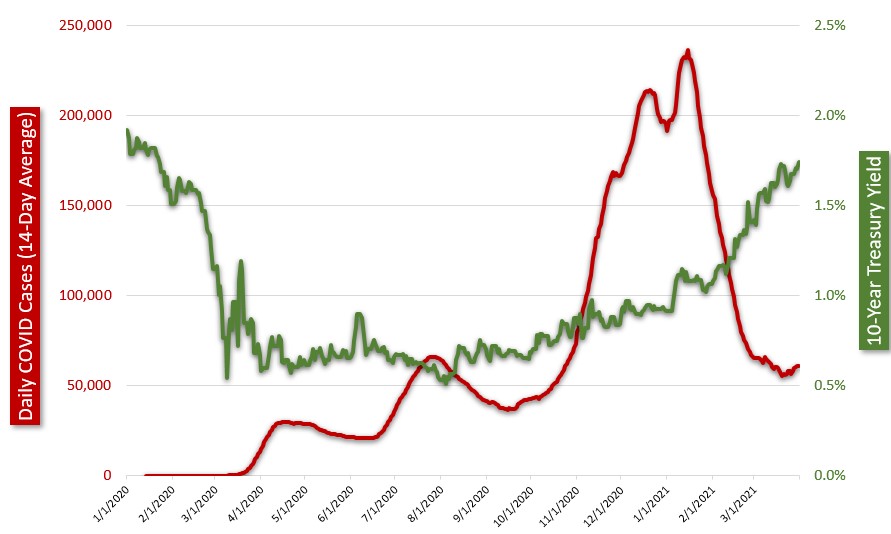 Rising interest rates had a pronounced effect on the stock market, causing a rotation away from last year’s winners, including the large five technology (aka FANG) and other high-flying growth stocks. The reaction to the flow from growth was quite positive for our strategy, as once overlooked holdings in the value and dividend space were the quarter’s star performers. In the end, the benchmark S&P 500 index delivered a lofty 6.2% total return in the first quarter.  The quarter also marked the one-year anniversary of the market bottom on 3/23/20. Since then, the S&P 500 has rebounded a staggering 78%, quite the testament to the value of maintaining a long-term investing discipline during times of market unrest. 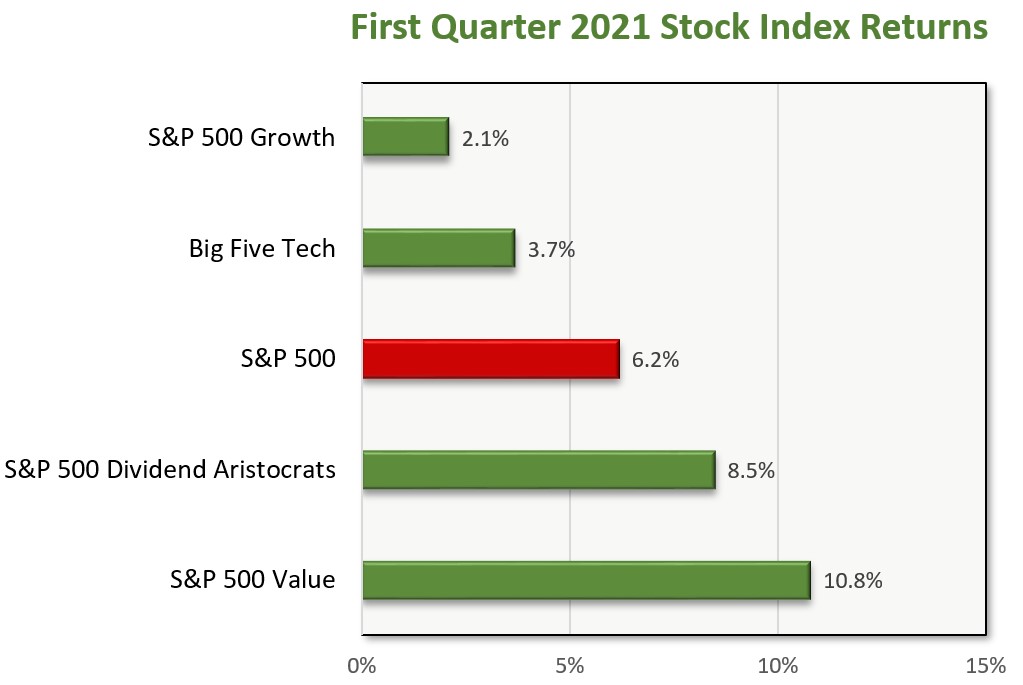 Due to the inverse relationship between interest rates and bond prices, the first quarter’s surge in long-term interest rates was painful for bond investors. As measured by the Barclay’s Government/Credit Index, bonds declined 4.3% in the first quarter, fumbling away nearly half of their stellar 2020 return. For the holders of long-dated issues, the pain was acute, with long Treasuries losing 13.5% in the quarter. The prospect of federal budget deficits was undoubtedly a contributing factor, but the primary reason for the uptick in rates was the market’s expectation for inflation. With the virus on the wane in the U.S., households flush with stimulus cash and anxious to spend, there is little question whether inflation will re-emerge over the course of the year. The real questions for investors are the severity and duration.

ECONOMIC FORECAST: The economy heated up in the first quarter, with all sectors improving substantially as U.S. vaccination rates exceeded most of the developed world. The U.S. added over 1.5 million jobs during the quarter, bringing the unemployment rate to 6%. GDP forecasters expect first-quarter growth of 5% with the full year exceeding 6% – growth levels not seen since the early 1980s. Businesses and consumers are equally upbeat about their economic prospects in the coming year. Both March ISM surveys were firmly in growth territory (above 50%), with Services reporting an all-time high of 63.7% and Manufacturing coming in at 64.7. Consumers are increasingly upbeat, with March Consumer Confidence coming in at 109.7% versus 90.4% in February. This was the fourth-largest monthly change in the history of the series.

As strong as the recovery has been to date, even more robust growth will come in the second half of this year, as COVID herd immunity is expected by the summer, and the latest $1.9 trillion stimulus package has yet to be fully deployed. The concern is that the economy will begin to run above capacity, leading to higher inflation. This fear is largely being discounted, with most economists and the Federal Reserve expecting a temporary surge in inflation and then a return to normal levels. The rise in inflation will result from three sources, base effects, supply chain disruptions, and pent-up demand. These are all transitory sources of inflation (factors that will fade with the passage of time), and we expect the resulting inflation uptick will be short-lived as well.

FIXED INCOME STRATEGY: The first quarter was a gut check for fixed income investors, but the silver lining was that the damage was due almost entirely to the rise in yields, not a systemic credit event. Corporate bond investors were hurt no worse than government bond investors, signaling that the additional premium that corporate investors demand for holding risky securities (the “corporate spread”) was relatively stable over the quarter. Generally, spreads tighten as investors become more confident about economic prospects. Still, the reality is that spreads are at the tightest levels we have seen over the last twenty years, leaving little room for further compression.

Fear of inflation is the main factor driving the increase in yields. Because we believe that this fear will be transitory, there is good news for investors in the long run.  However, we still will face a reality of steadily increasing yields in the short term, possibly to the 2.5% to 3.0% range on the ten-year Treasury. Accordingly, we will maintain the same defensive fixed income posture with short maturities that minimized principal loss during Q1’s steep sell-off.

EQUITY STRATEGY: Our equity selections performed admirably in the first quarter, primarily due to our emphasis on dividend yield. Over the period, our picks with dividend yields exceeding the S&P 500’s yield of 1.5% delivered a total return exceeding 10%. Also, adding value was our avoidance of the higher beta (i.e. riskier) area of technology, a group that was stymied by higher interest rates. The healthcare group, our largest overweight, was a bit sluggish during the quarter. Still, we remain very enthusiastic on the sector due to attractive valuations, a favorable demographic, and a favorable political backdrop.

In the near term, we believe the euphoric melt-up in stocks will wane, as some profit taking is expected. As the recent vertical move in stock prices begins to flatten, we continue to expect that consistent dividend income will further hold investors’ attention. In fact, their appeal may increase, as there is a growing flow of funds out of the inflation-rattled bond market into stocks, where the best substitution for those income-seeking investors is within the equity yield space.

ASSET ALLOCATION: Having the resolve to overweight equities versus bonds was rewarded handsomely in the first quarter. We are always looking forward, though, wiping the slate clean and returning to our long-term objective – maximizing expected return within the strict framework of minimizing the risk to principal from a market sell-off. In the long run, performance ultimately follows valuation, and from that standpoint the pendulum still lies heavily in favor of equity exposure.

From a practical view, an economy on the verge of being unleashed from the pandemic while the government continues to fuel the flames furthers our conviction for equity exposure. The most significant economic danger clearly is inflation, not recession, and the bond market is the most at risk. Corporations can generally hedge against transitory inflation by raising their prices to protect their profit margins and ultimately their share prices. The ensuing increase in interest rates from a bout of inflation may ultimately squeeze companies’ financing, but until rates become restrictive, stocks typically perform exceptionally well during rising interest rate cycles. From a historical perspective, stocks have gained in 19 of the last 22 periods of increasing rates, posting an average return of 16.5%.