MARKET SUMMARY: Stocks began the third quarter on the same strong legs to which we have been accustomed, gaining over 5% by the beginning of September. However, a litany of worries led to an eventual decline of nearly 5% during the final month of the quarter, all but erasing the previous gains. The worry list included the looming default of Chinese property developer Evergrande, stubborn U.S. inflation, a global energy crunch, the prospect of Federal Reserve tapering of bond purchases, the debt ceiling/budget/infrastructure debate in Washington, parts shortages in the global supply chain, elevated stock valuations, rising interest rates, and of course the pandemic. In the end the benchmark S&P 500 index gained 0.6% in the third quarter, bringing its year-to-date return to 15.9%.

Although the group briefly fell out of favor earlier in the year, large tech stocks reemerged as the market’s star performers, posting a gain of 22.4% for the year. The Big Five (Facebook, Amazon, Alphabet, Apple and Microsoft) now comprise nearly 24% of the entire S&P 500, so their outperformance has again artificially magnified the S&P return for the year. Still, as diversified managers who maintain only half the index weight in Big Five Tech and whose conservative roots mandate oversized attention to safety factors such as relative valuation and dividend yield (neither of which are in particular favor this year), our equity performance this year is within a breath of the Index’s. 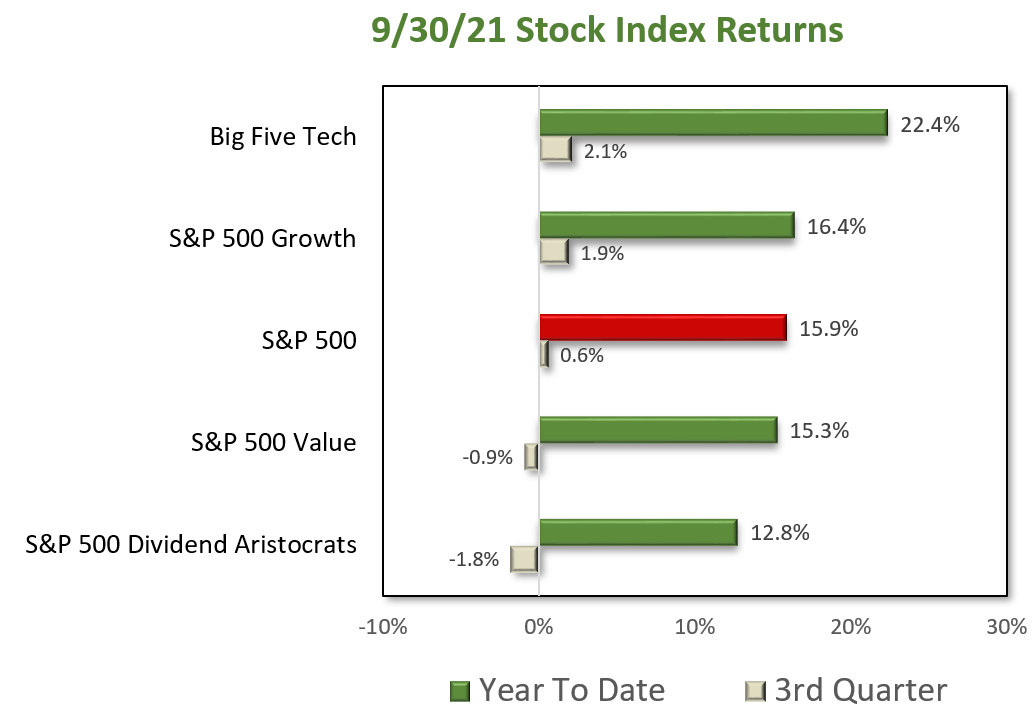 The 10-Year Treasury bond began the quarter yielding 1.44%. Although June and July CPI inflation ran at 5.4% annual clips, yields defied all logic and managed to decline, bottoming at a minuscule 1.17% on August 2. From there, investors apparently awakened to the reality of inflation and allowed interest rates to climb. By the end of the quarter the 10-Year yielded 1.52% and the return for the benchmark Barclay’s Government/Credit Index for the third quarter was a flat 0.0%. For the year, the Index has posted a decline of 1.9%, perhaps too generous given the growing risk that inflation may be more than just “transitory”.

ECONOMIC FORECAST: July saw substantial hiring gains as the economy began to fully open, only to be thwarted by the COVID-2 Delta variant surge during August and September. We had hoped for a seamless transition back to full employment, but this recovery tends to fit and start. Help wanted signs are not a figment of the imagination as 10.9 million jobs are available, yet they are to be filled by a shrinking labor force. Businesses are incentivizing new hires with lucrative sign-on bonuses and higher starting wages. This has been a much-politicized story, but ultimately it could lead to a revitalized and more productive workforce.

Estimates for third quarter GDP have been slashed in half from the beginning of the quarter, but growth will likely come in above the anemic levels seen since the Great Financial Crisis. The ISM surveys indicate strong demand for goods and services despite the sputtering job market. Longview Economics estimates that consumers have excess savings of $3.3T above the pre-pandemic level. That is a lot of dry powder to support spending into the foreseeable future. To date, the higher growth rate has come at the cost of higher inflation, which shows no signs of abating. The Federal Reserve declared mission accomplished on their inflation target during their September meeting and has been less dismissive of the recent prints. We are watchful for signs of a policy mistake that could spook the markets but have seen no worrisome signs to date.

FIXED INCOME STRATEGY: The term “base effect” seems to have dropped out of the Fed’s lexicon as price spikes appear to be more related to supply chain issues, which, at least in theory, should be transitory.  The lack of change in the 30-year Treasury yield seems to confirm that investors believe this inflation scare will pass.  We are less sanguine, however, and note that the real yield (adjusted for inflation) for Treasuries is significantly negative.  Accordingly, our fixed income strategy has been to focus purchases to no greater than five years in maturity so as to avoid locking in low yields with outsized downside capital loss risk in longer dated issues.  Corporate spreads (the additional yield afforded to owners of corporate bonds) remain at all-time lows as investors continue to seek any source of additional fixed income compensation.  We remain buyers, but only cautious ones, concentrating on high quality short maturity issues.

EQUITY STRATEGY: Markets will likely remain volatile as investors scale the wall of worry in the current zeitgeist. Investors seem to be hyper focused on the political theater around raising the debt ceiling, which is possibly an overreaction given its consistent history of being resolved at the eleventh hour. The major market indexes have not seen a 5% drawdown in close to a year, so a retrenchment is to be expected.  Indeed, some of the high-flying names whose valuations have caused investors angst were off significantly during the quarter. While equity valuations remained elevated as measured by P/E, they are in line with historical norms in the context of current record corporate earnings growth and operating margins.

Our biggest concern is how supply chain problems are resolved over the coming quarters without causing runaway inflation. Estimates are for bottlenecks to persist through mid-2022, but it could go on longer if another wave of the virus hits this winter. Parts shortages, shipping delays, higher raw material costs, and labor shortages make for a challenging operating environment. Companies see robust demand for their products and services but cannot fulfill them because of missing components. Remarkably despite these headwinds, earnings are expected to grow above 30% through the end of the year. Companies are protecting margins by raising prices without much pushback from customers. We believe they will continue to adjust until we make our way through these unchartered waters successfully.

ASSET ALLOCATION: The core of our asset allocation model is the equity risk premium – the excess return demanded by investors from stocks to compensate for their incremental risk over bonds. Even though interest rates rose over the month of September, which typically reduces the relative attractiveness for stocks, the equity risk premium set yet another all-time high, coming in at 7.8% (10.6% expected return for stocks minus the 2.8% yield for long-term industrial bonds). Based on this time-proven analytical framework, we are biased towards stocks in balanced portfolios barring extraneous factors such as geopolitical risk.

On their own, stocks may appear a bit expensive with the price/earnings multiple (P/E) for the S&P 500 standing at an historically high 20.6 times forward earnings. As is the case with S&P 500 performance, though, the mega-cap technology firms are also inflating the market P/E ratio. This particularly applies to Amazon, with a P/E of 51x and a 4.3% share of the Index. Strip out it and the other largest tech names and the P/E for the S&P 500 falls to a much more reasonable 18.1x. This is actually quite cheap given the negative real yields offered by bonds.

A final point in favor of maintaining increased equity exposure is seasonality. The fourth quarter is historically the strongest for stocks (hence the term “Santa Claus rally”). The root cause is debatable, whether it be long-side trading in advance of the typically strong month of January, lower trading volumes during the holiday season or a waning in tax-loss harvesting, but on average the fourth quarter produces a 4.4% return for stocks. Couple seasonality with extremely attractive relative valuation versus bonds and we have high confidence in our strategy of an overweight position in high-quality stocks.